Welcome to new reader 'Lone Wolf Warrior' (aka THAT Graham Empson). Hope you enjoy the blog.

With deployment out of the way it is finally time to get stuck in. As the Romans are attacking, they get to move first. Here is the troop disposition at the start. The Romans are at the top and look "blue". 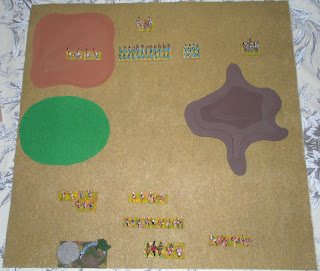 The turn sequence in Rally Round the King (RRtK) is basically:
So, one less decision to make (which unit to think about activating next), as it is governed by the rules.

As the Roman NPG has a War Rating of '3' and there are five separate bodies, only three will be able to activate. As the Roman battle tactics (determined last episode) was that the wings would hold back, while the center attempted to penetrate the enemy battle line, they seem most likely to move forward. The wings are to guard against the main battle line being encircled, so they are next most likely, with the cavalry on the wide flank and in reserve the least likely to advance at this point. So I start asking questions and rolling dice.

Every time a body moves it can elect to go from 50% of the slowest unit's maximum movement to its full movement. For the Romans, there is really little reason to go less than full speed, so the odds will be high. Starting with the right flank, the Velites roll first (Near Sure Thing) and get an Exceptional Yes (taken to mean that there is no cause to roll again until circumstances change), but also getting an even-causing doubles ('NPC Negative', 'Trick', 'Failure', roll indicated it was the Roman NPG that something negative happened to). I roll another die ('76') to determine how "negative" the result is (the higher the more negative) and come to a conclusion that the Romans were trying to pull a stratagem to steal a march on the Spanish (i.e. one free turn of movement) and it failed, back-firing on them. The signal was given and the Velites moved forward, but the remaining troops forfeit their activation.


Generally speaking, I don't like to 'break the rules' as they are given in a game, but I feel this result is justified. The RRtK rules say you can activate up to your War Rating, but it never states you have to use all of the points. In fact, as the battle goes on and all units are in motion, the Commanding General has little to do until he commits himself and his bodyguard to the fray. 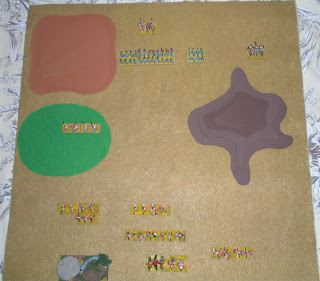 Reviewing the battle plan, the left wing is to advance into the woods and secure it, then harass the Roman battle line from the flank while the slingers harass them from the front. When the Roman line is weakened, the Spanish Scutari and cavalry will counter-attack and sweep away the weakened units. The Scutari on the right are to fend off any opposition that attempts to flank the main Spanish battle line. This makes the three bodies to activate the left flank and the slingers. All others need not activate.

I ask the questions and get that the left flank will advance (Sure Thing), as will the slingers (Near Sure Thing). However, when asking whether everyone else would stand their positions (Likely), I got a No, so I followed up by asking if the Light Cavalry was to swing out to the right flank of the Scutari on the right, in order to guard against the flanking Roman Cavalry and received a Yes.

I follow these up with questions about moving maximum and receive Yes to the Light Cavalry and the left flank. The slingers in the center have two factors to consider: 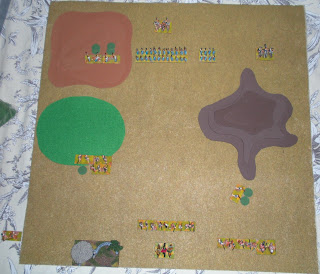 As the Velites were within 1/2 move of the slingers, they could not stay out of their range, so there was no reason to ask a question about their move.

The Light Cavalry, being the rightmost to activate, moved to the right of the Scutari line and formed up as part of that body. (As they are skirmishers, they can move and face in any direction freely, so getting to that position is relatively easy.) At this point I consider the unit Halted and no longer active. Although you automatically halt when you reach a terrain piece designated in your orders, I have always interpreted this to also mean when you reach a designated station (such as at the end of a line).

The slingers move forward until they come within the 45º angle to fire and with only 1" of woods to pass through and then halt. Only the left unit can fire and it inflicts a hit on the leftmost Velite.


This is where the THW reaction system comes into play. The Velites have to take a Received Fire test to see how they react to being under fire. Their result was to return fire on the slingers.

The Velites return fire, inflicting a hit in turn on the leftmost slinger. The slingers now react passing once for the unit hit and passing twice for the unit on the right. The left slinger retires one move, unfortunately carrying it through the right slinger unit, which is a skirmisher, resulting in it routing (and being removed from the board). You can see it in the picture with two green dots (hit markers) at the foot of the hill.

The Caetrati and Scutari on the left flank advance into the woods, spotting the Velites – that clearly ambushed the slingers – toss their javelins and in the ensuing exchange, drive the Velites out of the woods (they retire, each with two hits).

This is not at all how I expected the game would go, at this point, but it is interesting. Results in RRtK tend to be very harsh and decisive. Just as small units don't survive well in some games, small bodies don't in RRtK because you receive a modifier to your reaction test for each supporting unit in contact with you, up to three. That effectively turns a REP 4 unit into a REP 7 unit.


Just a note about the Spanish turn. Let me say in my own defense that the bone-headed move by the slingers was largely due to my unfamiliarity with the rules. I view it as similar to when you learn in DBA that a unit recoiling into another friendly unit that is not lined up 'just so' results in the recoiler being destroyed. (By the way, that is not true in the new beta DBA3.0.)

Had I been more familiar with the rules I would have not tried to get fancy and have the slingers facing the Roman battle line while still firing at a flanking Velite; I would have faced both slingers at the Velites flank and been done with it. Not only would it have doubled the firepower, but the failed roll would not have routed the second slinger unit as the first would not have retired through it.

Ah well. It is one of those lessons you only have to learn once!

At this point I am stopping for the evening. I would like some feedback on whether it is better to get these 'episodes' in more frequent, but smaller chunks or just get it over with even if it takes a week (or more) to get it done. Let me know, either through email or a comment on the blog.
Posted by Dale at 10:34 PM