I decided to continue on a little more. It appears that I made two (more) mistakes, one of which were some missing pages.

The Roman Velites were a little beat up (two hits each) in the initial skirmish, having lost in an exchange and been forced to retire. Everything else had not moved.

The basic idea was to advance with the main battle line full speed and have the two wing groups advance, echeloned slightly back. However, the Balearic slingers were in a vulnerable position, with the flank facing the Roman cavalry on the other side of the hill and already having accumulated two hits. So I decided to see if the Roman commander would launch the cavalry for a quick kill.

Given that the Velites retired and no other Roman troops advanced the previous turn, the Roman commander would have to use his three activation points to order the advance of the main battle line and wing supports, so a cavalry attack would mean something else would not activate. Further, due to the position of the Roman commander with relation to the enemy slingers, he was not really in a position to see the vulnerability, nor were the Roman cavalry (due to the intervening hill), so I rated the chance for this cavalry attack to be low. The roll was not sufficiently low enough so the same choices as last turn were presented and accepted (only without an event interrupting the battle plan).

First to advance were the Velites, who made the edge of the woods. In visibility of the enemy skirmishers, but out of missile range. Next was the main battle line. This advanced at full speed, causing the Spanish on the left flank to make a Threat check, but it was passed without a problem. (Had the Romans advanced to within 3" missile range the Spanish would have been able to fire. Note that had the Romans has sufficient movement to either move within threat range but out of skirmish fire range, that would have been an additional decision to be adjudicated. As it was, they were just in Threat range and sufficiently out of javelin range.)

With all of the Romans so far away, the only logical move was for the slingers and caetrai to get back in action. No exceptional rolls indicated that any other unit would be brought forward yet.

First the slingers moved back into position in front of the Roman Principes. (Still playing the move and fire rules.) The slingers let loose on the Principes, missing them by a hair, but close enough to irritate them. 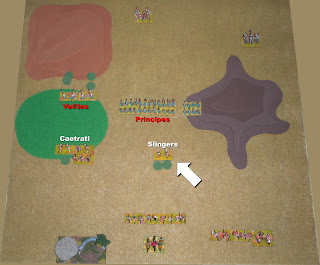 The Principes rolled an Advance ½ Move result which would have put them past the slingers, so this requires an additional Want to Charge check, which they pass with ease. 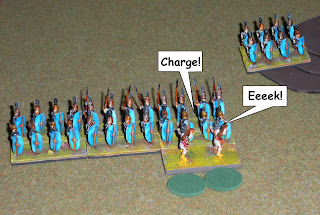 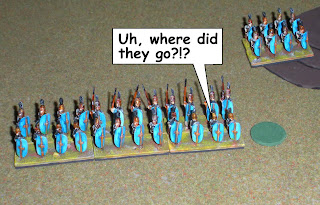 The slingers pass partially and fire their slings one last time and head for home. At least they inflicted a hit first!

The Spanish caetrati move against the Roman velites and chuck their javelins, inflicting a single hit. This is enough for the Romans, who roll badly and rout off of the board. 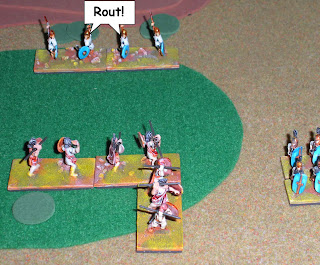 Meanwhile, the scutari chuck their javelins at the flank of the Roman battle line and get suitable attention. 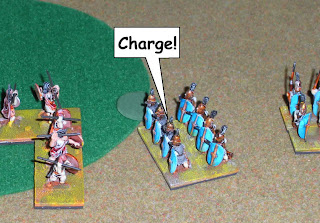 The Romans turn to flank and get an Advance ½ Move result, but fail their Want to Charge test. Here is the situation at the end of the turn. 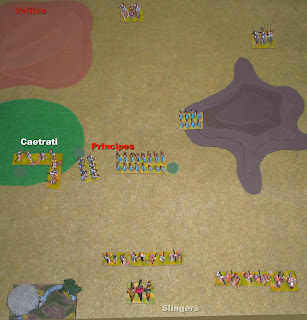 The Spanish battle line must definitely advance next turn, assuming their reaction to the Roman advance doesn't spoil their plans.

With one wing gone and the main battle line out-pacing their supports, it is time to throw the cavalry forward, before they get far behind. The main Roman battle line is already in motion, so it does not need to be activated; nor does the Hastati on the hill. However, the Principes that turned to flank halted when attempting to charge, so it needs to be activated, as do the two cavalry units. As the Roman commander can activate three bodies, he can activate all of the halted bodies if he wants to. So, is there any reason why he should not activate anyone? A roll of the dice indicate all are going in, however both cavalry units are to merge at the top of the hill on the (Roman) left flank. Note that this "condition" means the body will halt upon reaching its destination, so is akin to moving the reserve.

The poor hapless Romans on the right have heard stories about what happens to soldiers in the woods! They refuse to charge once again. 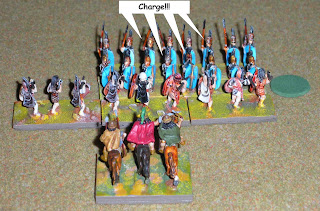 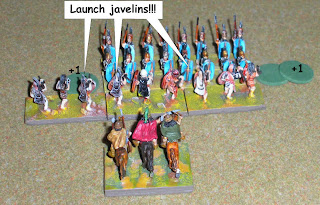 In the center the Roman line charges and the Spanish stand and fire. The javelin fire is murderous, inflicting one hit on each Principes unit. 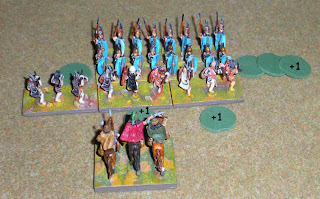 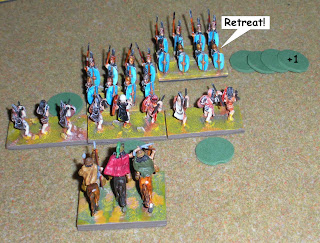 The Spanish take the worst of the clash, receiving more hits than taken, but they hold. The Romans left-center, however, has taken too much and gives ground. 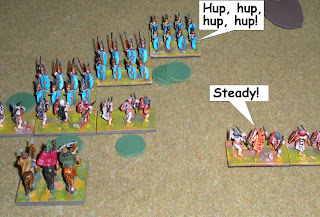 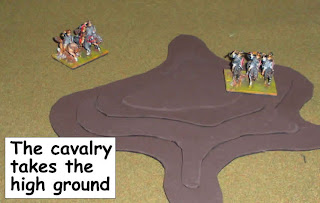 Meanwhile, on the Roman left flank the Hastati advance, threatening the scutari guarding the flank, but not in range of being fired upon. (The Romans had a choice here and Mythic indicated that it made no sense to expose the troops to fire.) The Spanish morale held in the Threat check, however.

On the hill, the first of the Roman cavalry units arrives, with the General still out of view of much of the battle. 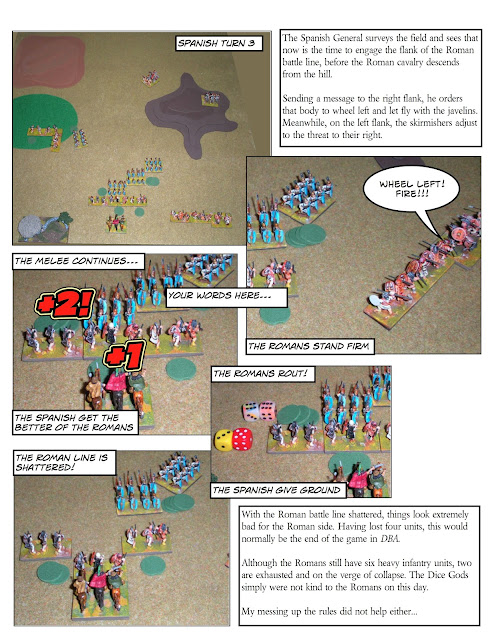 The situation for the Spanish actually looks pretty good. Although both sides have lost two skirmishing units, the Romans have been hurt a bit by javelin fire from the Spanish scutari. It will be interesting to see how the Spanish commander acts.


Let me apologize right now for the total screw-up of this game. Thank goodness I was not reviewing and playtesting these rules! Also, I am experimenting with some new software, hence the sudden change in appearance of the graphics. I use a Macintosh, but own some graphics software for Windows which I am very comfortable with, so I tend to use them using Windows 7 under VMware. I finally decided to bite the bullet and search out some graphic software for the Macintosh to replace my beloved copy of Macromedia (yeah, it is that old!) Fireworks so I could do everything in the Macintosh environment. I used Preview to crop pictures and lower the resolution, then used Comic Life 2 to assemble it into a "comic". I think I like the effect, but I am not sure yet. I still need to tweak the page size and resolution so it is not so large. But, you tell me what you think. I think that the comic can provide the visuals and the narrative, while the surrounding text provides the dry descriptions of the solo mechanics.

I think, in hindsight, it was a mistake to allow missile units to move and fire, but only another game will tell, and to be honest, I am not so sure I am fond of these rules. I think I am just too used to DBA and how they play that it is hard to wrap my mind around how these should work.

Clearly I made mistakes in decisions.  Units move much more quickly in these rules, so you cannot afford to dawdle. The key is to put units in motion, but not too soon. You can always slow a unit down to ½ speed if they are outpacing supporting units.

The biggest problem (but I am sure is a design decision) is that units are not maneuverable. I noticed this when I was considering what to do with the Spanish General. It could not wheel left or right 90º (it was trapped by the Spanish scutari line in front) and a 90º face, lateral move, oblique move, and pivot are all not allowed by any troops. I was too bunched up on the Spanish baseline (which was also a function of the smaller board size). Very different from DBA, of course, which allows a single element to move freely. I am not sure which is more realistic.

The Romans lost because the battle line did not expand frontage after they passed through the pass between the woods and the hill. This meant that in the first round of melee it was two units facing three and in the second round, three units facing one. The Romans simply got crushed at those odds.

On a side note, Ed from Two Hour Wargames just announced a new, free addition for Rally Round the King. Here was his press release.


Dave Gray, the co-author of RRtK is working on 120 historical armies spread over four periods. The RRtK Historical Sampler (see the picture on the [THW Yahoo] group home page) should be released within the week. It has 12 historical armies and a new campaign system called the Local Campaign.

Look for it as a free PDF.

This may be just the impetus I need to give these rules another go. That and reading the rules a little closer. All in all, I would probably have to tweak these rules so much that they would not look like the originals. At that point it would only be confusing to someone who uses the Rules As Written.

I need to find another mechanism to study. There are few rules out there that claim to be solo friendly. As I have been delving deeper into solo gaming I am finding more mechanisms that are solo unfriendly than the opposite. Suggestions are always welcome.

At some point I need to tackle a mainstream game and do something more than simply "play both sides to the best of my ability". That works, but not for long.
Posted by Dale at 12:19 PM