In this article I will use a specific game and scenario to illustrate some solo gaming mechanisms. From there you can determine for yourself whether this sort of mechanic suits your gaming style or whether another might be more appropriate.

We have been focusing on battle card driven and hand management systems, such as those found in the Command and Colors family of games. In this battle report I am going to use Memoir '44, one of the easier and more enjoyable variants of that game family. The scenario will be X, which is from the basic game.

This scenario is an interesting one for illustration purposes, as it has two special unit rules and one special scenario rule which can make for a challenging game. 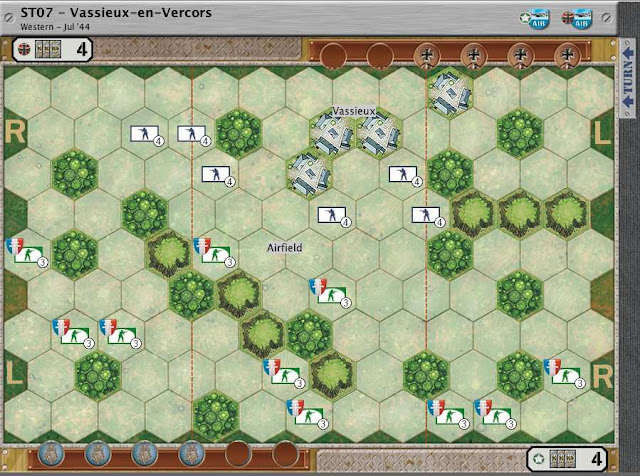 The scenario notes are as follows:

When 'Their Finest Hour' command card is played, do not reshuffle the command deck. Should the command card deck run out of cards and the Allied player has not won, the battle ends as an Axis player victory. Starting with only three figures makes FR units a little more brittle than the opposing German units, but they still hit as hard. So a fresh FR unit can get wiped out in a single close assault. Something to remember even if there is nothing you can do about it.

What makes this scenario interesting is that the French outnumber the Germans in units 9 to 6, but only outnumber them in figures 27 to 24. So the Germans need to focus on eliminating units (which is a typical objective for Memoir '44) and the French want to avoid that. What makes these units interesting is their mobility in terrain. While they do not move faster than other infantry, except in retreat, their ability to move into terrain and still battle allows them choices other units would not have. 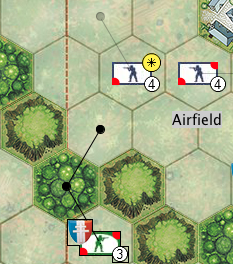 This creates several behaviors that the solo gamer should consider for their 'programmed' FR opponent that would differ from a programmed German opponent: 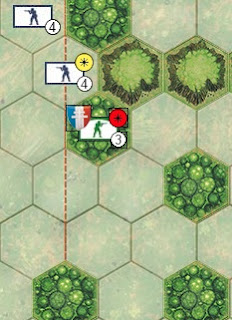 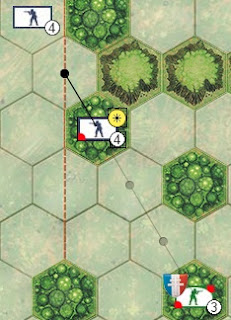 For this game, I am going to start by combining three solo gaming techniques together: Play One Side While Programming the Other (Battle Planning); Hand Flushing (for the programmed side only); and Rules-Based Responses.

Play One Side While Programming the Other (Battle Planning) - This essentially means that for one side, I will play a normal game of Memoir '44 with no additional rules, mechanisms, etc., but for the other side I will devise a plan and attempt to follow it as the cards allow. Given the random nature of Battle Card-Driven systems, I should devise a primary, secondary, and possibly even tertiary plan. Note that the very nature of this method is atypical of how people generally play the Command and Colors family of games. In my experience, most people play very reactive to the cards dealt, the dice rolled, and the opponent's moved, until they score the requisite number of victory points. Knowing the opponent's battle plan will often not help that style of player.

Hand Flushing - The programmed side will draw their full complement of cards, play one card, and discard the rest of the hand each turn. As they will be following a battle plan, they will choose the best card for that plan, if it is available. If an appropriate card is not available, they will choose the best card for the secondary plan, and so on. The player side, when using a Counter-attack card, will duplicate the card played for the programmed side and will ignore all of the other cards discarded.

Rules-Based Responses - This is a way for overriding the general plan. Simply put, a set of rules will be put in place which allow the programmed side to select units that might not be directly meeting the primary battle plan, for example by selecting a unit reduced to one figure, in order for it to retreat and thus not give up an easy victory point. Response rules also allow the player to determine how the units will be used when they are given orders.

As I don't want to burden myself with an inordinate amount of preparation time, I will largely be developing these rules on the fly. This will allow me to develop rules sets for future use in other games and essentially my programmed opponent will get "better" (or at least a little more consistent) as time goes on.

Battle plans are listed in order of precedence. If the first cannot be executed because of a lack of appropriate cards, or has already been done, drop down to the next item in the plan.

1. Establish a base of fire with the FR units in the center. 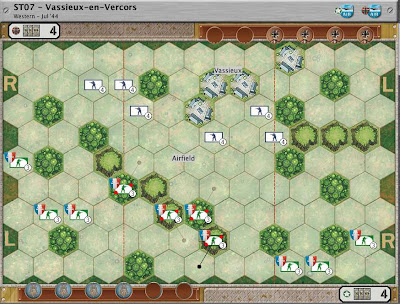 2. Establish a defensive line on the left flank and swing it around to the right, pushing German units into the center. 3. Swing the right flank units around to the left, pushing German units into the center. 4. Eliminate the most vulnerable German unit(s) while maintaining the best defensive positions possible.

The plan sounds pretty simple; it doesn't need to be complex. You are just establishing a priority for card play and guidance for selecting units to order and moving ordered units.

The next part to develop are the response rules for the FR units to use. Right now, I am only going to use two rules; all the rest will be built as we play out the first scenario.

So, I'll be playing the Germans and the programmed opponent will be running the FR. As per the normal rules, I deal out four cards to each side.

Preliminary - At this point, as the Germans move first, I really only need to draw the Axis hand. If I move a German unit adjacent to an Allied unit and close assault, I will draw the Allied hand to see if I get a Ambush card. Otherwise I won't draw the Allied hand until it is the Allied turn. This will leave the element of surprise as long as possible.

German Turn 1 - My hand is so-so. I got a Medics and Mechanics card, which is always good, but Armor Assault can only be used to order one unit; otherwise I only have cards for the center. 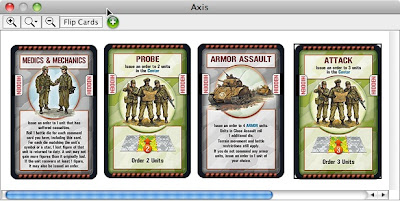 I decide to go strong in the center, while there are still a few FR units exposed. The first German attack, a close assault, forces me to draw the Allied hand. No Ambush card is drawn, so I keep the Allied hand and keep playing on for the Germans. They attack with three dice, get lucky, and inflict two hits and one retreat. As the unit is now at one figure, a modified version of our first response rule comes into play. (The response rule is about ordering weak units; our new rule is about how to conduct retreats with a weakened unit.) Here is the move I made.

Notice that I decided not to simply move to the first hex out of line of sight, but moved one additional hex. I call hexes that straddle a sector line (the dashed red line) a 'power hex', as a unit on it can act on a card for either sector. So, I have to weigh the advantage of being on a power hex versus being one hex farther away if I choose to counter-attack. As this is a weakened unit, I opt to program the opponent to take the safer option. The new response rule set is:
The next attack caused another FR unit to be crippled and retreat. I drew my replacement Command card for the Germans and ended the turn. The board now looked like this. 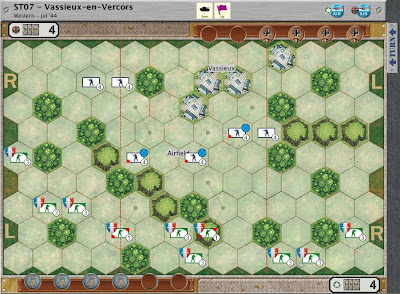 French Turn 1 - The French hand previously drawn was pretty good (even if it did not have an Ambush card).

So, the Allied player discards the entire hand (the Hand Flushing mechanism), counting the General Advance card as the one played. Here is the French move. Another rule I developed as I was moving was that if a unit could not move one hex and fire upon the enemy, it moved two hexes, as long as it either moved into terrain or remained out of line of fire. Thus, four of the units moved two hexes and thus could not battle. One unit moved only one hex, but still could not battle because it was out of range. That left the one unit that could move one hex, into terrain (an FR specialty), and still attack. It scored a lucky hit and knocked off two German figures.

The turn is over but the Allies do not draw any cards. Again, they will only draw just before their turn, or if attacked in the German turn from one hex away (to see if they get the Ambush card).

The rules for the FR units are now:

I will continue this example in the next entry. Let me know what you think so far, if you are so inclined.
Posted by Dale at 7:55 AM