This is the tactical battle for my first engagement in my solo campaign, The First Elopean War. I have decided to use the rules One-Hour Wargames (OHW) by Neil Thomas to fight out the tactical battles. The only difference from the normal rules in that I used a 6" square grid for regulating distance. For the campaign, I am using The Solo Wargaming Guide (TSWG).

In a recent blog post (on my other blog) I went over the process that I am using to convert campaign units to OHW units and back again. Let's talk about the complete process for taking a contact on the map from the campaign to a battle on the tabletop.

Although this might be a relatively straightforward step, as indicated in the blog post above, there are some options and a little bit of bookkeeping. Because OHW normally has 15 hits per unit, any understrength units need to be indicated. Further Light Infantry companies and Light Cavalry squadrons can be deployed as either Infantry and Cavalry units, respectively, or as Skirmisher units. How these troops are deployed would be determined at this step.

As the Eastonian commander I have a choice of making a very weak (6 hits) Cavalry unit with my two Light Cavalry squadrons, or making a weakened (12 hits) Skirmisher unit. As I did not define a 'tradition' for consolidating companies, as Justo did, I will allow the local commander to randomly determine it. Because I think the Skirmisher unit is more survivable, I will use the following table to make the decision, rolling enough D6 until all the companies and squadrons are accounted for.

Using that table I roll a 4, meaning the two squadrons will form a Skirmisher unit. As it is only a partial unit (2 instead of 2 ½ squadrons), the unit has 12 hits.

The method used in TSWG is to use playing cards to randomly determine the terrain. (Because part of this campaign is to convince myself that using lots of random elements for solo gaming – which both TSWG and Featherstone's solo gaming books use – is not so bad, I felt I needed to use as much of it as possible.) Because OHW on a grid has a board that is 6 squares wide by 6 squares deep, I decided to use one playing card for each square, largely because the campaign hex being fought in is a wooded village. If it had been a clear hex I would have drawn 3 cards wide by 3 cards deep, randomly rolling which of the four squares got the terrain indicated.

In the TSWG system only black cards produce terrain, here is what I drew.

This translates to the following terrain.

By the way, this engagement was taking place on the map at the town of Firnskuppe, so the Red Joker was replaced by the town.

Because TSWG tells you to not slavishly follow the cards, I made a few adjustments to the terrain. 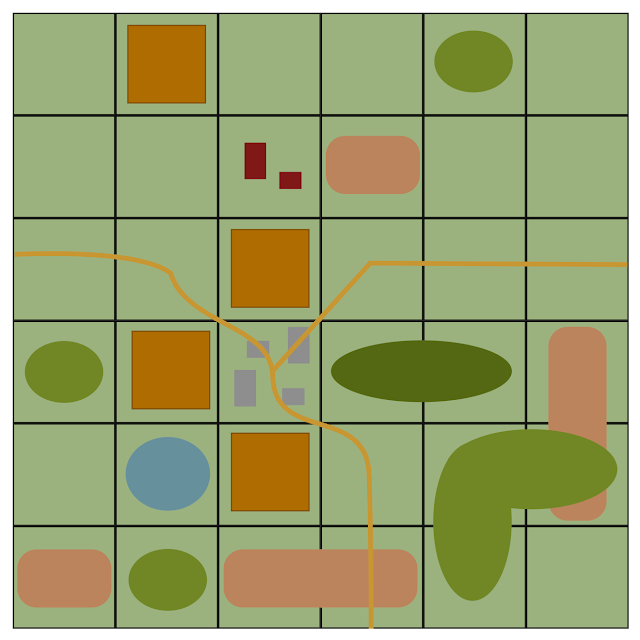 As I am using the Horse & Musket period of OHW rules, here are the effects of the terrain.

Road - Units moving by road increase their movement distance by 3" if their entire move is spent on the road. This bonus may not be received if charging.

Lake - Impassable to all units.

Firnskuppe - As this is a Village (class E) and not a Town (class D or better), movement is not affected for any unit. Units receive ½ casualties from firing.

Hill - Units in close combat defending a hill from an attacker not on a hill receives ½ casualties.

Tactical Advantage is determined by having each side roll a D6 and adding their CCR. The higher value wins.

TSWG gives several options for baseline configurations, as shown in the image below. 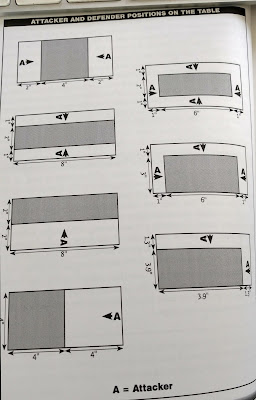 I allow the side with the tactical advantage to choose the configuration. If there was a tie, there would be a die roll.

Counting the top of the map as North, the Eastonians occupy rows 4 through 6 while the Westonians must enter the board anywhere on row 1. Westonians can choose to send a flanking force, but must 'secretly' declare whether it will be their left flank (east of the town) or right (west of the town).

A while ago I purchased a product called Kings of War: Battlefield Cards. Unfortunately, Mantics Games no longer sells them, but you can often find them on eBay or dusty gaming store shelves. These are very similar to the Warcry Battleplan Cards in that you get Objective, Conditions, and Strategy cards, allowing you to modify game scenario easily. 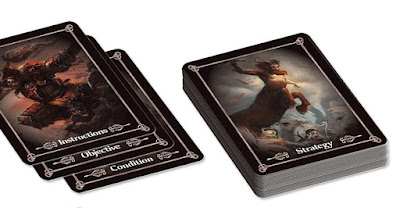 The strategy cards a little boosts that can be played during the battle. As they are specific to Kings of War, they may take a little interpretation to make them useful for OHW.

Each side will be allowed to draw a number of strategy cards based on the following formula:

For this battle I drew the Reduced Visibility condition card, reducing all line of sight to 18" and any ranged attack beyond one square being at D6-2.

The Eastonians drew the following objectives:

Primary: Place a Bounty token on each of your opponent's three most expensive units. 2 VPs if at least one of these units is eliminated. 1 VP for each of these units eliminated in melee. (This latter clause is impossible for Skirmishers as they cannot enter close combat in OHW.)

Secondary: 2 VPs if the total points (companies/squadrons) you eliminated if higher than the total eliminated by your opponent.

Primary: 3 VPs if you have more strength (companies/squadrons) within two squares of the exact center of the board than your opponent. 2 VPs if you hold or contest the Base Objective on your half of the board.

Secondary: 2 VP if you hold or contest the Base Objective on your side of the board.

Because the Base Objective is a part of the Westonian objectives, and they are repeated twice, I decided that the two base objectives were the east road (column A, row 3) and the west road (column f, row 3).

Both sides get one Strategy card. The Eastonians draw:

Sudden Faith: Subtract 1 from a nerve test made by you or your opponent. (Because OHW does not use nerve tests, but represents morale in terms of hits, this means that the first loss of hits to your unit will be one less than what is rolled, to a minimum of 0.)

Stolen March: You may deploy your units up to one square closer to the center line than normally allowed in this scenario.

As they Eastonians won the tactical advantage, the Westonians must deploy first. Because of the Strategy card they may either play it at the start, and deploy on row 1, or choose not to play it and enter row 1 on the first turn. Further, they may choose to flank march with one of their two units. Let's determine which deployment they will use.

I chose the basic plan as the Infantry attacking through the Farm and securing Firnskuppe for 3 VPs while the Cavalry would secure the west road (where the main army is coming from). However the die roll could indicate otherwise.

I rolled a 3 followed by a 5, so both the Westonian Infantry and Cavalry will start on board, in squares C1 and B1, respectively. The Eastonian Skirmisher will start in Firnskuppe. 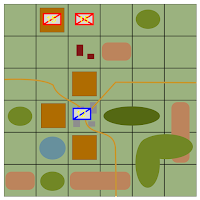 Skirmisher holds. No fire is allowed due to the Reduced Visibility condition. The Eastonian commander attempts to roll his CCR (or lower) and fails. They cannot retreat. 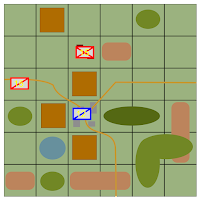 Infantry moves from C2 to C3. Cavalry holds. There is no firing.

Skirmishers fire, but score no hits. The Eastonians succeed in rolling their CCR, so they now have the option of retreating from the battlefield. 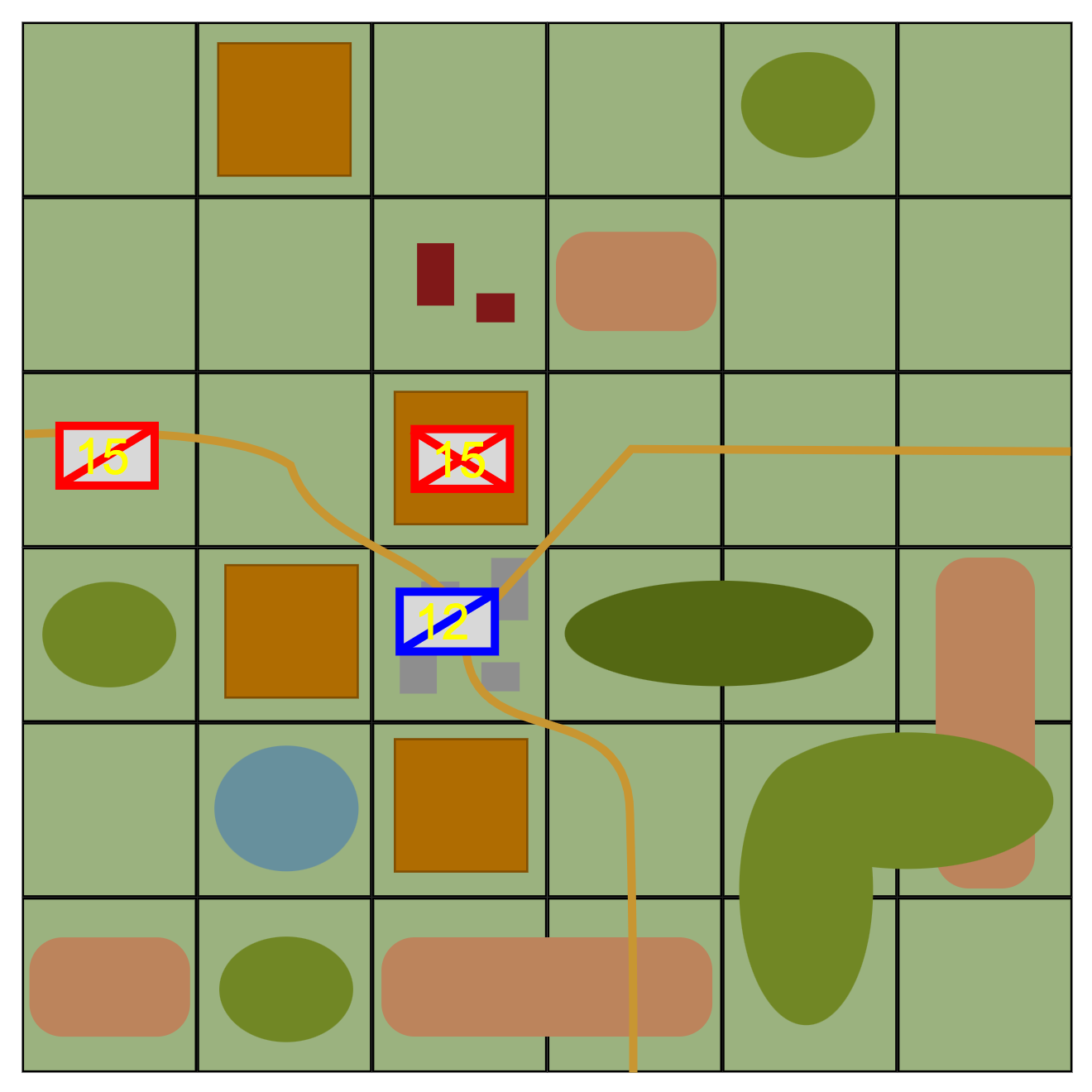 Cavalry holds. Infantry fires, with the Skirmishers playing their stratagem, also resulting in no hits. 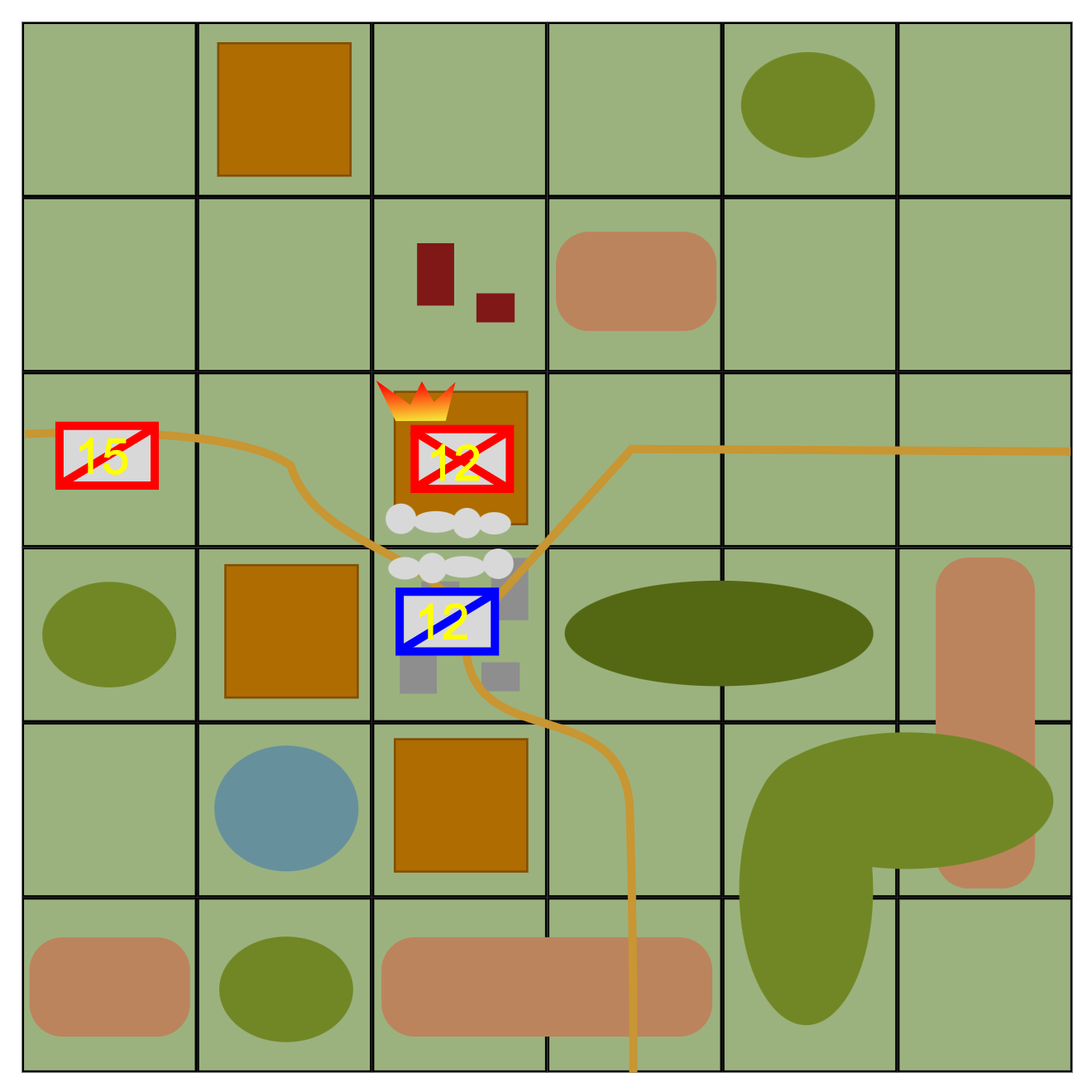 Cavalry moves from A3 to B4. Infantry fires, scoring 2 hits. 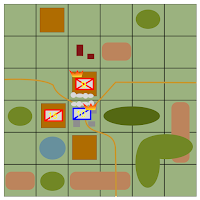 The Red Infantry is now down to 9 hits, having lost two companies, while the Blue Skirmishers has only lost ⅓ of a squadron. Seeing that the Red Cavalry is flanking them, but have entered the Fields where they will be slow in exiting them, it looks like a good time to retreat. The Westonians will have 5 VPs and the Eastonians 4 VPs; a very narrow victory for the Westonians.

The Firskuppen Husaren withdraw down the east road to warn the garrison in Erlenloch that the Westonians are coming, and the battle draws to a close. 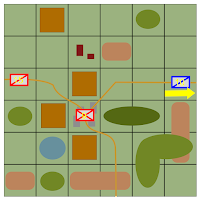 I will be picking up on how to deal with casualties and convert from OHW units to campaign units back on my Dale's Wargames blog.

Please note that I have started using Amazon affiliate links for any Amazon product I feature in my blog posts. You don't have to use them, of course, but anything Amazon gives me does not affect the price you pay, so using it contributes to my caffeine-fueled blog posts' funding.