Ambush on the Forest Road

This game comes from my map campaign. If you want to see how I generated the terrain, scenario, and various twists to the game, read my blog post about it.

As indicated in the other blog post, this battle will be fought out using Neil Thomas' One-Hour Wargames (OHW) rules, which the basic scenario also comes from (a combination of scenario #6 Flank Attack (1) and scenario #13 Escape). As with the last two battles, I have added some twists to the game by using the Kings of War Battlefield Cards and the Warcry Battleplan Cards. 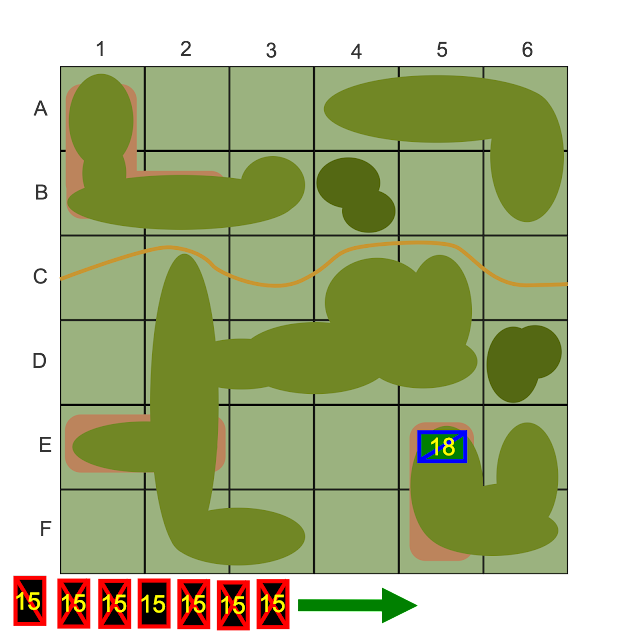 In a nutshell, the Westonians (red) will be marching on the board, starting in C1. Because the force consists of Infantry, Artillery, and Cavalry all units are confined to the road if there are woods (light or dark green ovals) in the square. Their battleplan is to exploit the gaps in the woods (C1, C3, C6, and D1) to deploy troops and destroy the Eastonians.

The Eastonians have set up an ambush, however their forces consist solely of Hussars (skirmishing light cavalry). They can move through any square save the heavy woods (dark green ovals). Their battleplan is to ignore the minor victory objective (moving troops off of the board to the West) and fight as hard as possible in inflicting damage on the ambushed Westonian troops.

There are a number of special rules for this scenario.

Artillery, Infantry and Cavalry on roads may move through woods squares, but because they cannot deploy into that terrain, they are limited in what they can while in those squares.

The Westonians drew a useful Stratagem to use called Sudden Faith. It allows them to modify a die roll by 1 for an activation test (see Rules Changes below) for one unit, once. The Westonian player does not need to state before the die roll whether they will be using the stratagem, they simply declare when it will be used.

The twist to this scenario is that because the Westonians are largely trapped on a road moving through the woods, save for occasional clear areas, they will fight with Battle Frenzy, which in turn cause the Eastonians to fight with the same vigor and effectiveness. The effects of Battle Frenzy are as follows:

Generally speaking I don't like changing rules, but frequently do it, as it makes battle reports harder to understand by people that know the rules but do not know your changes, so I will list them out here, largely because I am doing some experimentation with these changes.

The battle will start with the Westonians (red) entering the board in C1. They will move 9" (1 ½ squares) down the road each turn until they move off the board via the road exit.

The first turn is rather uneventful, as you might imagine. As a note, when a unit moves in other than increments of 6" (the size of our squares) I usually mark them to show that they have additional movement that can carry over to the next turn. For example, the Red Infantry moving down the road has 9" or 1 ½ squares of movement. On the first turn they move 6" (one square) and gain a movement marker (green circle in the front-left corner) indicating that if they have 9" of movement next turn, they will me able to move 12" (9" + the previous 3") or two squares the next turn, at which time the marker will be removed.

The Blue Hussars, because they have a 15" movement, also receive a movement marker. 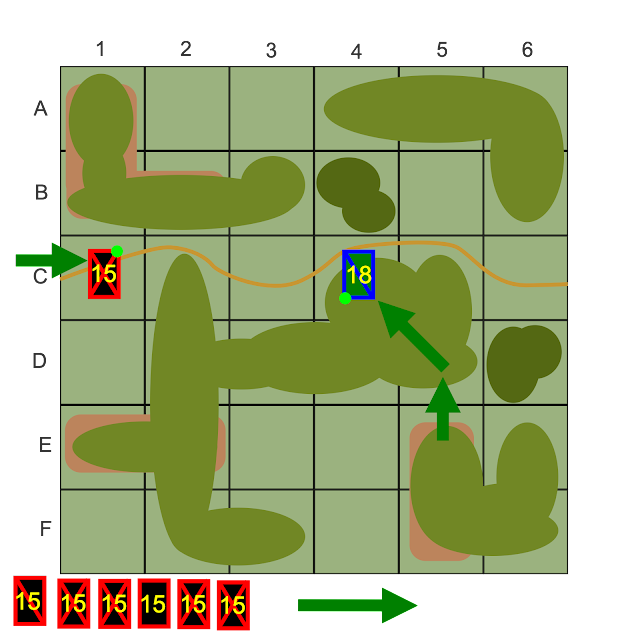 Red troops continue to pile on while the Blue Hussars fires at the enemy, inflicting a heavy blow to their morale. 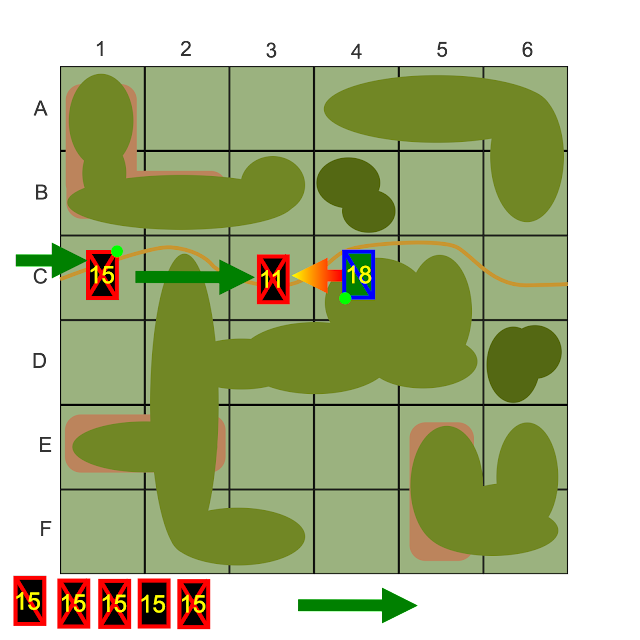 At this point it might be helpful to calculate the Average Turns to Eliminate or ATE of each side. I use this score to help me understand which action is the best to take. It helps me remove bias from my game play decisions.

At this point the Red Infantry is in a clear terrain square so it is deployed into line formation and can fire fully (1D6). However, the Blue Hussars are in cover, so casualties are halved. That allows Red to inflict about 2 hits per turn, so their ATE for the Blue Hussars is 9 (turns). If they charge into close combat they switch to 1D6-2 (ATE 18), so there is less reason to charge if the goal is to inflict maximum damage. However, Infantry force Hussars to retreat if charged, so this is a viable option.

The Red Infantry has a choice: 1) stand and fire at the Blue Hussars (ATE 9), who also have an ATE of 9; or 2)  charges the Blue Hussars in order to drive them back, while inflicting minor damage (ATE 18). Applying a 50% chance to each option Red chooses to drive Blue down the road. 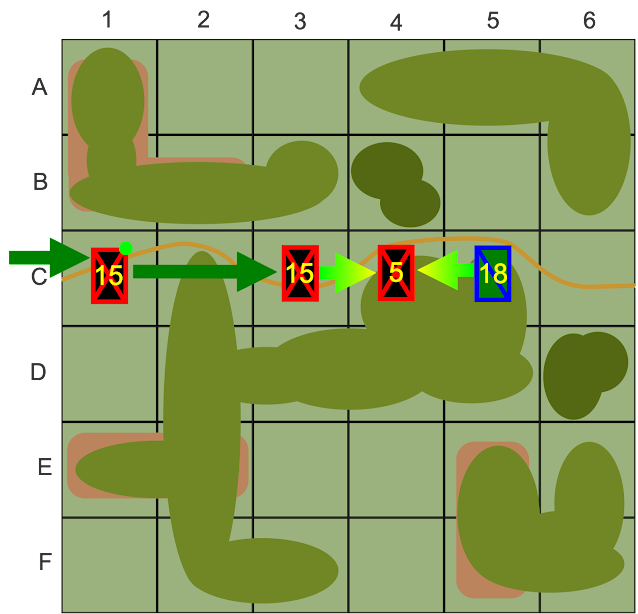 Solo Gamer's Notes: I actually played this out twice. The first time I had the Red Infantry stand and fire in C3 and they were eventually eliminated. At some point (turn 7?) I struck upon the option of charging to push the Blue Hussars off of the board and wondered if I should have tried that option. As I had forgotten to apply the Activation Rule, and that was the whole point of playing these experimental games, I decided to rewind back to this turn and dice to see which way Red would go.

With the Red Infantry at 5 hits they now have to roll to see if they activate. They roll a '10', so they do not! The Blue Hussars continue to fire away at the Red Infantry, whittling them down further. Meanwhile the column of Red forces have come to a halt. 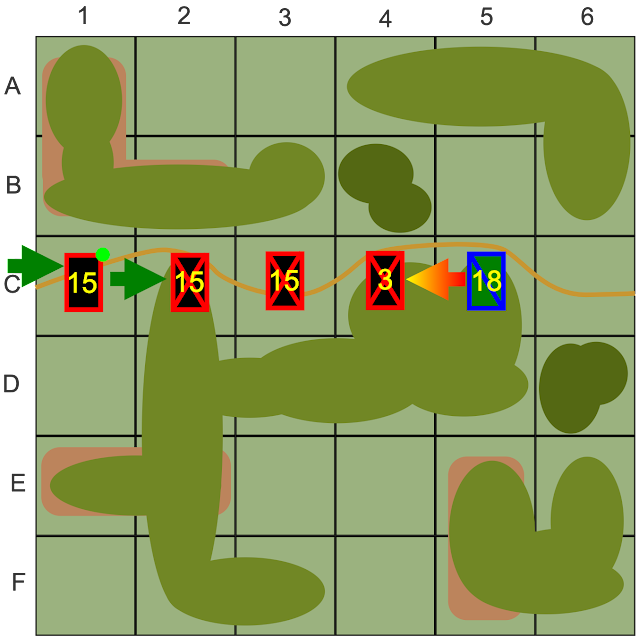 That was a disastrous turn for Red and unless the vanguard is exceedingly lucky, the unit is going to fall. The second Red Infantry should have enough elan to push the Blue Hussars back a turn or two, but then what? Until the Blue Hussars are whittled down below 10 health remaining, they will likely continue to act each turn. Although this is an experiment, I don't want it to be at the expense of the entire Westonian Southern Army. (Or do I secretly have an Eastonian bias…) 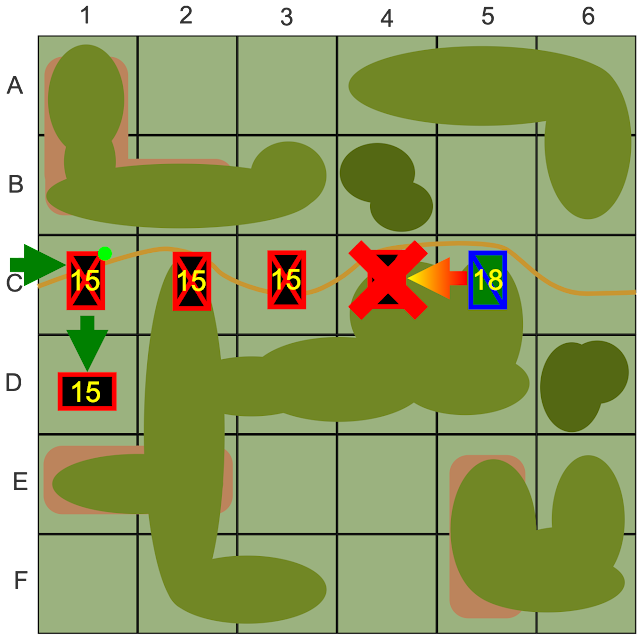 Solo Gamer's Notes: The Blue Hussars had a choice of either standing and firing or charging into close combat. The number of hits inflicted is the same in both instances, but close combat would have resulted in taking position C4. Had they charged, the Red Infantry in C3, which is in clear terrain and thus deployed, would have been able to fire with 1D6x½. As they stood and fired, Red Infantry must advance next turn, giving the Blue Hussars first fire.

Continuing with their strategy, Red is pushing forward with the point of the bayonet. The carnage in the woods is horrendous, however, as the Blue Hussars continue to exact a toll on the confused and densely-pack Infantry.

The Red Infantry continue to roll low – not having scored a single hit on the Blue Hussars all game – but they continue to push them back, but at great cost. 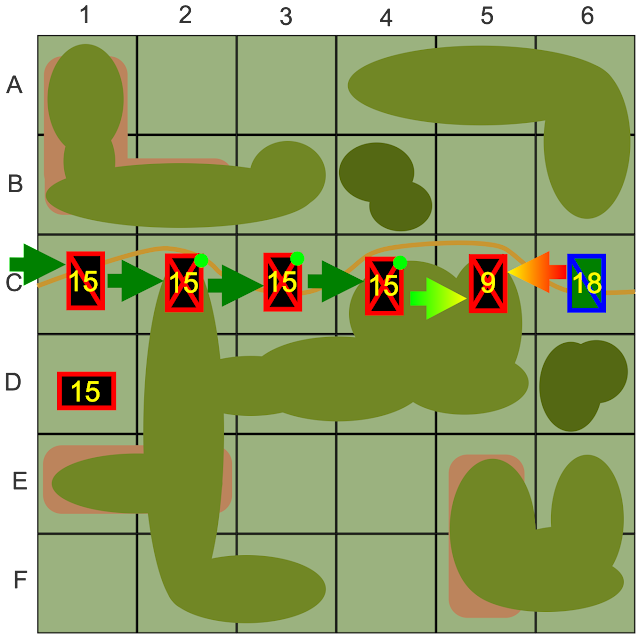 Solo Gamer's Notes: At this point I need to make a decision. Do I allow the Red Infantry to push the Blue Hussars off of the board and end the game or do I allow them to stand? This was one of the 'gotchas' that came up with this rule in my AWI variant of OHW, which has this same 'defender retreats' mechanic. Another possibility is to extend the battlefield by creating column 7. This is one of the possibilities you can do with solo gaming, especially if you have the space. As the first two options are not especially realistic – there is no magic line in the ground that instantly stops combat or gives a unit the courage to stop retreating – so I decide to extend the battlefield, rolling for terrain. If the terrain generation is generous enough – like it was in E3, E4, and F4 – it might open up at the road allowing Red to overwhelm Blue.

After generating more terrain – and the results were not kind to Red – I continue with the combat. 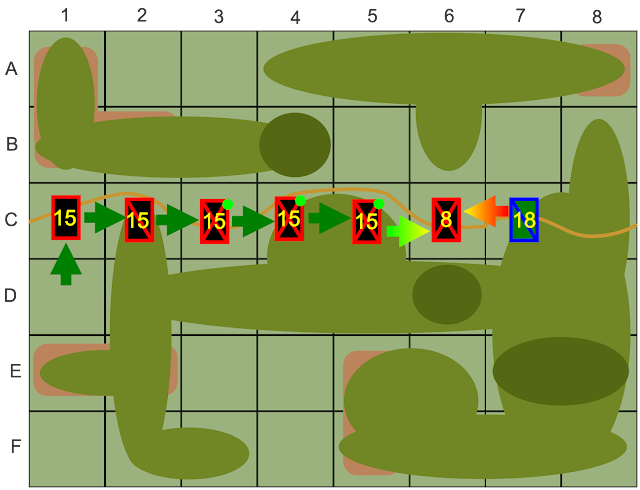 Solo Gamer's Notes: At this point I feel a twinge of "Are you sure this is the right tactic for Red?" When Red deploys, the casualty rate against it goes down and the casualty rate against Blue goes up. Given that pushing Blue 'off board' does not result in a victory, only in the board being extended, pushing no longer seems like an effective tactic. So, either Red takes a stand here or … if Red can push Blue back one more square to C8, this would allow Red Infantry to move to C7 and eventually B7, while the next Red Infantry would move up to either C6 (to let Blue move back to C7 to be caught in a crossfire) or to C7 (to switch out to a fresh Red Infantry unit). I decide to keep the current 'push' tactic on a 1-2, with push to B7 on a 3-4, and stand and fight on a 5-6. Apparently the lead unit is tired of taking hits, so they want to stand and fight.

A cheer goes up from the Red Infantry as they finally score some damage against the Blue Hussars, but it is quickly quelled as the return fire is devastating (1 hit versus 4 in return). The Red Infantry courageously continues to stand and deliver. Unfortunately, it was not enough. Red Infantry's morale collapsed and they could not longer effectively muster the courage to charge or to fire. The Blue Hussars whittled them down but failed to eliminate them when darkness feel. Both sides retreated to regroup. 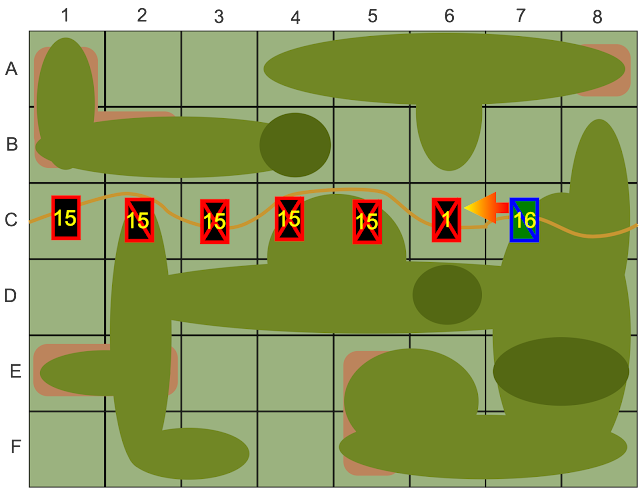 Wow, was that battle different! Again, the goal of my campaign is to generate scenarios with context to the both the last and next game, create scenarios that are not plastic, even point battles, and create situations that you might not normally play with a face-to-face opponent (such as a 7 units versus 1 unit full-on ambush). So far I feel like I have succeeded, in only for blowing dust off of products that I purchased and have never used (I am looking at you The Solo Wargaming Guide, Kings of War Battlefield Cards, and Warcry Battleplan Cards.)

For those of you who are fans of OHW, I would like to hear from you about what you think of these modifications. Half casualties for Hussars (and Skirmishers) did not have a huge effect because so many attacks were close combat and 1D6-2. When they finally turned to firing, they kept rolling a '1' and then they failed activation.

What did have an impact were the activation rules. Once a unit gets below a certain number of hits it is doomed, save for the occasional bit of luck. The reason why this rule had such an impact though is due to the nature of the terrain and unit characteristics. If there had been room to maneuver, or the unit could have been interpenetrated, their inability to activate would have been much less of a consequence.

For those here for the solo mechanics talk, I know I have moved away from programmed A.I. type rules and towards using chance to determine a course of action amongst two or three (or more) logical choices. From a gaming viewpoint, this method is more flexible than programming, but it allows more player bias to creep in. Then again, sometimes the path that you think is the 'best' turns out not to be, or allows you to explore other concepts like an expanding tabletop. I would like to hear what you think about these concepts also.