Jim Walton asked for clarification on my last article, regarding the response rules. So, here it is re-written:
Thanks for helping me clarify that Jim!

German Turn 2 – Picking a card is tough here. Generally speaking, you want to maximize your cards' value. As I have a Attack Right card, allowing three units on the right to be ordered, but only two units there, it might make sense to move the one unit (marked with a green star) into the woods, which is on a 'power hex' straddling the center and right flank sections (also marked with a green star). 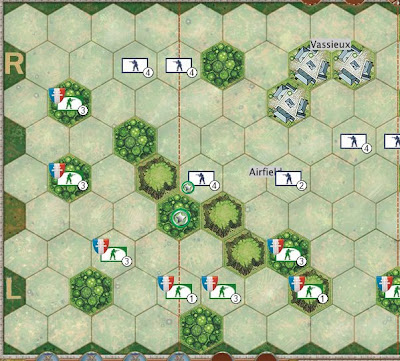 This might not be a very strong example, but it is an example that shows you why this is a "hand management" system; you manage your cards in order to play a sequence, in this case over the course of several turns, such that it would give you an advantage. If I play the Attack Right card now, I lose a chance to order a third unit on that flank. However, if I play my Probe Center card first, moving a German unit from a center hex to a center/right flank hex, I can maximize the use of the subsequent Attack Right card.

As my other two cards are Medics and Mechanics and Armor Assault, I don't have a better option (in my opinion). The Medics and Mechanics card will allow me to heal the German unit reduced to two figures, but it is a little early to play that. The Armor Assault card means I can order any one unit in any sector (as I have no armor units) but that is really a discard almost. I could pitch it now, but given that my right flank is exposed to two FR units in woods, I need to start adjusting soon.

Probe Center it is. The unit moves into the woods, straddling the center and right flank sections, losing its attack. Meanwhile I bring another unit up closer to the woods, by my injured German unit. If I draw a good card I want to be in a position to have as many units in a position to assault the woods as possible.

The German, rolling a single die, forces the FR unit to retreat. As a single hex retreat places it out of the line of fire, it can stop there. 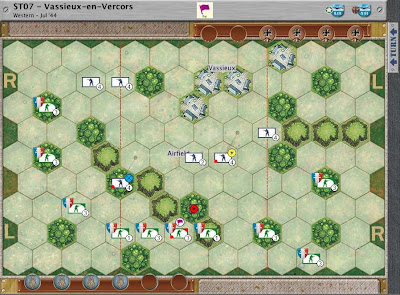 I draw an Attack Center as my replacement Command card, so I now have a choice next turn between ordering three units in the center or three on the right flank. We will see what our 'opponent' does.

French Turn 2 – First I have to draw a new hand.

The Germans have been successful driving the French back off of the woods and ridge line in the center, so the first objective is still not met. That means committing to the center. However, my unit with one figure, straddling the left flank/center hex, is now threatened by the Germans in the woods. This unit must be ordered out of harm's way first. With a Probe Center as my only choice, that is the card I take. 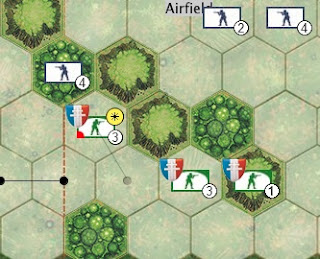 The question is which of the other units to order. A frequent choice comes up in games: move into the open to closer range and attack with more dice, or move into terrain and attack from there with fewer dice. In the picture above you can see the FR unit moving adjacent to the German unit in the woods. This allows it to attack with two dice (three dice for being adjacent, minus one for attacking into the woods). Had it moved to the hex to the right of it, it would attack with only one die (two dice for range, minus one for attacking into the woods), but a German counter-attack back would also be at one die because it too would get cover from being on the hill. However, from that position on the hill it would also be possible for the two German units in the upper-right to move and fire upon it also. That is a very vulnerable position. So, another rule: when choosing between hexes to move to it is better to choose the one where fewer units can return fire at you.

The attack, unfortunately, does not dislodge the Germans, but does inflict a hit.

German Turn 3 – Having moved last turn so I can take advantage of my Attack Right card I do so, as it is a better play than the Attack Center. As one of the units ordered will be my German unit just attacked in the woods, and my opponent is adjacent, I have to draw the Allied hand to see if it has an Ambush card. Fortunately it does not, so I continue on with my attacks. Although I push the FR unit out of the woods at the top, I get no results other than retreats. 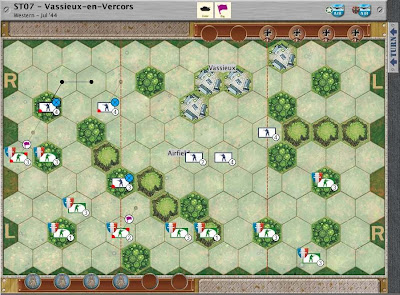 French Turn 3 – Having drawn an Assault Center card, allowing me to order all my units in the center, it is obvious which card to play.

The French enjoy a good turn. Although the French counter-attack against the woods is unsuccessful, another unit gets a lucky roll and eliminates the previously damaged German unit, while a third is driven off. 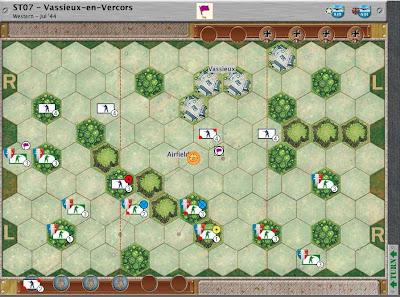 A note about the FR unit with one figure at the bottom (with the yellow marker). The reason it was not forced to retreat is, although it was within line of fire of the German unit forced to retreat, it could not be hit at that range (one die, minus one die for being on the hill). Thus, from that position it could shoot one die at the German and receive none in return, therefore there was no reason to force it to retreat.

German Turn 4 – That was not a good turn for me, as losing a single unit means losing one-sixth of my force. Maybe I should have used that Medics and Mechanics card after all...

At this point I can either Probe Right, allowing me to attack with the unit in the right/center woods and move another German unit in the woods, or I can flush the Armor Assault card from hand now. I decide to do the latter.

I still do not wipe out the French unit attacking, but it is now reduced to one figure, so a 'good enough' result. Even better, it is replaced with the Move Out! card, allowing me to order four infantry units, in any section. A very good card for this scenario.

French Turn 4 – Interesting problem for the French. With the two German units in the center having pulled back in the center, the only remaining German unit in the center also straddles the right flank. Thus I am willing to declare the center objective met. However, I now have a French unit with one figure remaining that is adjacent to a German unit (and thus in the line of fire) that I have to order out of harm's way, so that suggests forcing me to use a center card. However, the French drew an interesting card: Behind Enemy Lines. This allows you to order one infantry unit to move, attack, then move again.  By using this card the weakened FR unit can attack (with an additional die no less) and then retreat to safety. Clearly the card to use. The French attack, roll two flags, and the Germans run while the French retreat to safety. 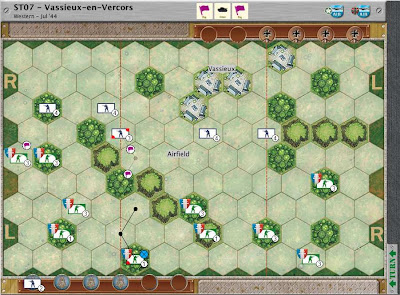 The score so far is Programmed Opponent 1, Human 0 (how humiliating!). Although the French have three weakened units, the Germans cannot get to them in order to collect the victory points. The game isn't over yet, however.

Intermission – The question that always comes to mind when playing solo is "Is this method working?" For me, it does. I have always believed in a rules-based approach than a probability-based one (i.e. making a list of choices, assigning probabilities to each, and then rolling a die to make a choice). As I indicated in an email to reader Jim Walton, I think the rules-based approach probably yields fewer 'surprises' for the solo gamer, but then again I feel that most surprises in a game are based on either game mechanics (e.g. particularly lucky or unlucky die rolls that lead to an unexpected miss, a catastrophic hit, a failed morale roll, a unit standing against all odds, etc.) or a misunderstanding of the rules ("I didn't think you could do that!"). When I am surprised by an opponent's move, it is usually because I think they made a mistake, not because it is a good move I had never thought of. (No, I am not that good, but I usually think through the angles. I am not always right about my assessments, however.)

So, a rules-based approach can probably be considered more 'predictable', but I think it also does not produce an 'erratic' opponent, which random die rolls often do. Nonetheless, I will try probability-based system next, just to expose myself to it more. Who knows, maybe I will be surprised in a good way.

Back to this, however. I strongly suspect that flushing the hand produces a significant advantage for the opponent, but so far it has not felt overwhelming. I have seen good cards come and go. For example, I just had to discard a Counter-attack card from the French hand. That is always a good card to keep for as long as possible, and can often be a game winner. So, there are positive and negative aspects to the mechanism.

As for the rules, I don't really have that many yet. I have probably been making more decisions than I have written about, and I need to capture them. But for now it does not feel like I am simply playing the French side as I would if I had been playing the hand. There was at least one turn in which I would have preferred to have played a flank card instead of the one I did, so I know this system already produces a different result, which is good in my mind.