Continuing with the game.

German Turn 5 – I play the Move Out! card, allowing me to order four infantry units in any section. This gives me the opportunity to continue pressing on the right flank and re-engaging in the center. Out of six dice rolled, only one was a hit and four were retreats! Boy these French like to run... 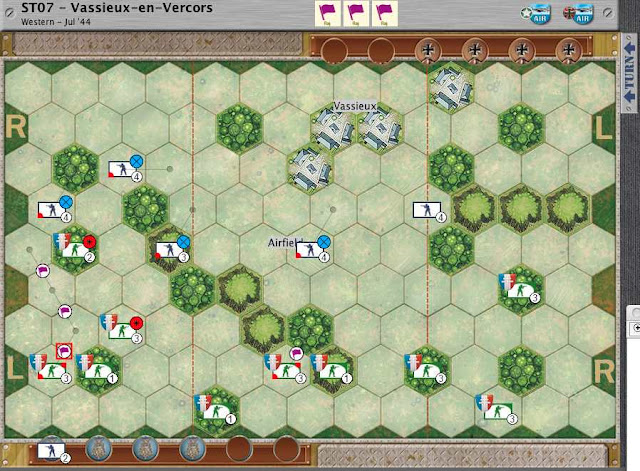 French Turn 5 – At this point the center is (again) not secured, but the French have no center cards, only right flank and a Direct from HQ, which allows the player to order four units in any section. Direct from HQ it is then.

Looking at the picture above, which shows the French positions at the end of the turn, only one French unit is out of position, and that is the unit with three figures that had just retreated. All others are either one figure, and therefore must be kept out of danger, or in terrain and supporting a center defense, so that leaves three orders for the secondary objective – securing the left flank.

The French did a little better, driving back two German units and inflicting two hits. 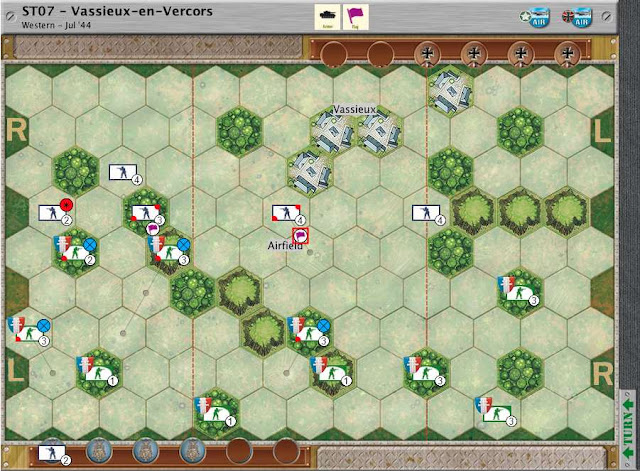 German Turn 6 – The Germans had a lucky draw and were able to get a Direct from HQ card also. The question was whether to use it, or to use Medics and Mechanics on the German infantry reduced to two figures. I went with keeping up the pressure and using Direct from HQ. The Germans were able to do much better this turn, inflicting two hits (reducing one unit down to a single figure) and forcing a retreat. 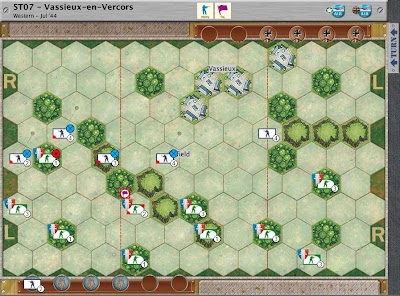 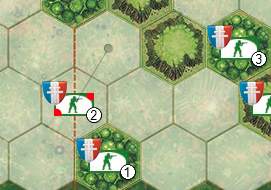 Note that the picture to the right shows a corrected retreat. The FR unit should have retreated three hexes to end on the hex straddling the left and center sections. Why? There is now a unit on the left flank that is down to one figure, so that unit must move, according to the response rules. Because the French has been close assaulted, their hand had already been drawn and it consisted of Attack Center (3), Armor Assault, Recon Left (1), and Assault Left (All). As there are no multi-section cards, and a left flank card had to be played, retreating to a left/center hex, rather than staying in a center hex, allowed one more unit to be ordered with the card that had to be played. Something to keep in mind as both a player, and something to add to the programmed response rules.

French Turn 6 – By playing the Assault Left card the French get to order four units (although one unit effectively does nothing).  The French must be running out of bullets, however, as all they do is force the Germans to retreat; they inflict no hits. 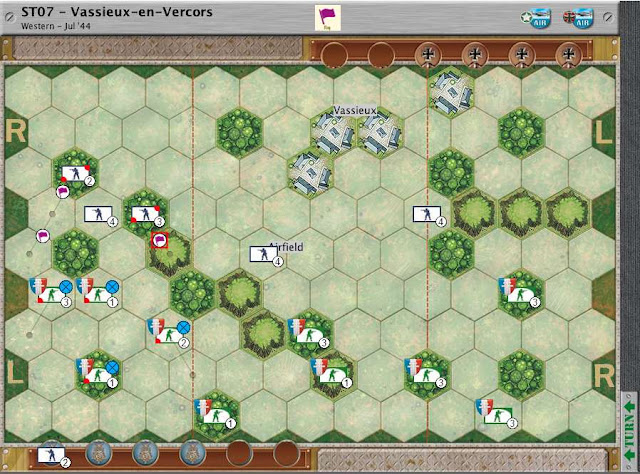 At this point the French are still leading 1-0 and have been anything other than a cake walk for the player (me). Although four separate FR units are down to one figure, only one is really within reach of the Germans. At this point I will draw the curtain to a close on the game and summarize.

By the way, the Germans did finally win, 4-1. The Medics and Mechanics gave one German unit a new life when it was cut down to one figure. In a small unit count game like this, that card is very powerful. In addition, the French dice simply failed them. The Germans slowly chewed through all of the FR units hiding in the rear with one figure remaining. Despite the score being so wide, one German unit was reduced to one, but revived with the Medics and Mechanics card while a second German unit was reduced to one figure and another to two figures, so they were not looking too healthy. On a critical turn it was the choice between running away with a single figure FR unit or using an Air Power card to try and whittle down two German units (but there was no chance to destroy them both). Had both units been one or two figures each...

Overall, I liked the Flush the Hand method for determining the programmed opponent's hand. It kept me wondering if the French would ever get the Ambush! card when I was close assaulting. As we got farther down the deck, I started becoming more reluctant to throw units with only two figures into close assault, so it kept up the suspense for me too.

I think the most surprising part for me was the use of a battle plan. So many people play battle card driven, and similar, forms of games wholly reactive. The thinking is generally along the lines of "I cannot control what cards I get, so why make a plan that relies on something I cannot control, so I will just react to the cards, dice, and my opponent's moves." I think planning is something lacking in so many games today. Most command and control systems don't require long-term planning and, like battle card drive systems, players just do whatever is the optimal move for that particular turn. The best players certainly think several turns down the road, but I think few players have real battle plans prior to starting their games.

Maybe it was my wargaming "upbringing". I played Column, Line, and Square as a kid, which was a written order, simultaneous movement game with movement rates low enough that having reserves and a plan actually meant something. What I found having a battle plan and using it for the programmed opponent was that the non-player side actually felt more consistent than I did! Also, I did not catch myself thinking "well, I know that the opponent is programmed to act a certain way in these conditions, so here is how I can track its stupid and predictable movement."

I'm not saying that I had a brilliant plan for the opponent, but at least it was a plan towards a consistent goal. I recently read that one solo gamer would write down the possible moves of an opponent, assign probabilities, roll a die for the choice, but keep adding more information and, over time, the "AI" would get better. All that player was doing was developing a rule base governing how to play (what units to choose and what move to make when chosen, for example), but instead of forcing a strict order to executing the rules, assigning probabilities so that the most logical – one that would have been assigned a higher precedence in a true rule-based decision making system – would occur more frequently. In both cases, however, the player develops choices, assigns a qualitative value to each choice, and records those decisions so that the process becomes less "administrative" with each game.

Well, I hope you have enjoyed a peek into my thinking process, and can glean some use of this battle report. Next, I am thinking about looking at reaction systems, such as those developed by Two Hour Games (e.g. Rally Round the King, 5150, NUTS!, etc.).
Posted by Dale at 10:27 PM