As I indicated in my last post, I do not like injecting game mechanics into rules for the sole purpose of creating randomness to simulate "surprise" as it can break some rules whose turn sequence and turn-to-turn sequence are finely tuned. That said, someone of the solo forum I read asked a better version of the questions normally asked. He asked "I want to play (IGO-UGO) rule set X solo. Do you have any tips or ideas to do that?" 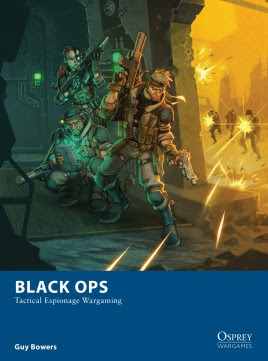 I bought a set of rules some time ago and, for whatever reason, I set them aside unplayed. (Probably because I rotated out of tabletop miniatures gaming at the time, but it could be that I was scoring a fix as I am a "rules junkie".) The rules were from Osprey Publishing and they are called Black Ops, by Guy Bowers, editor of Wargames, Soldiers, and Strategy magazine.


Ironically, the solo card set Hostile: Tactical A. I. (HTAI) was written specifically for playing the defenders in Black Ops scenarios, according to the author of HTAI. (I did a two part play through and a review of HTAI a few posts back. Recommended.)


Back to the subject, Black Ops uses card activations, red for one side, black for the other. Each side's leader is the Ace, Kings are the heavy weapons, Queens the specialists, and Jacks (all of) the soldiers. Now it totally randomizes the card draw – cards from both sides are placed in a single draw deck – so not only do you do not know which side will be activated next, you don't know which figure type. The rules Tin Soldiers in Action (TSIA) use this same sort of mechanism – a single draw deck composed of cards assigned to units which are drawn to determine activation order – so this is nothing new to me. However, if you modify the idea slightly – assign a card to a single unit and create a draw deck only for the non-player side, this does not break the rules in any way. You still keep the IGO-UGO sequence between players, but when it is time to play the non-player side, you can take the decision of which unit acts next out of the hands of the player. Let's run through an example.

Let's say the non-player forces consist of the following units. Assign a card to each one.

Create a deck of these seven cards and when it is the Orc non-player's turn, use that draw to determine the next unit to act.

If your rules are, say, broken down into Movement, Ranged Combat, and Melee Combat phases, and all units complete a phase before moving on to the next phase, then you would use the draw deck for each phase, determining unit order for action in that phase. When the phase is complete, reshuffle the deck and draw again for the next phase. So in this example, there would be three sets of draws, one for each of the three phases.

If your rules are broken down into phases, as above, but a unit completes all phases before moving on to the next unit, you would simply only draw through the deck once a turn for the non-player's units.

Sometime there are glitches simply following the order generated randomly, especially with moving. Random generation may not allow a group of units to act in concert, such as marching in column down a road. Black Ops, like many rules, provide a mechanic to deal with that. In Black Ops it is giving the "Reserve" order; other rules might call it "Hold", "Wait", "Standby", or similar. It is basically the order that says "I cannot make the move I want to make because another unit is blocking the way, because it has not moved yet. Once it moves, I will make my move."

You can fix this glitch simply by placing a marker on the unit being ordered, and fixing in your mind the unit it is waiting for to move first. When that unit then moves, the waiting unit takes its move immediately after. This, in fact, may cause a cascade of units that were waiting to move, say if all of the units in a road column were selected to move before the head of the column is drawn.

In summary, you can easily add the randomness of card activations to help the player decide the question "Which unit should act next?" without disrupting or materially altering the way the game designer intended the turn sequence to function. (See my last post on the subject of decision making and activation order for more information.) This is a much less disruptive way that strapping on a Red/Black card activation model to replace IGO-UGO.
Posted by Dale at 6:43 PM