When we left off last time I was lamenting that there were still a number of decisions that the solo gamer is responsible for with Two Hour Wargame's (THW) rules Rally Round the King (RRtK). Let's review those decisions the solo gamer needs to make for the Non-Player General (NPG).
With the preliminary decisions out of the way, the solo gamer then needs to make the following decisions every turn for the NPG.
Again, some actions are not legal in the RRtK rules, such as most maneuvers once a unit is within charge range of an enemy unit it is facing, so it is not really a decision, but following a rule.

So, the solo gamer is left with determining how to make all of these decisions. Last series I created a set of rules that dictated the behavior of the NPG. I have been asked by some readers to explore the idea of using probabilities and chance to determine the NPG decisions, rather than pure logic and rules. Given that I don't believe in purely random systems – as the NPG itself gets random, which most often is not very challenging as the majority of possible moves are bad ones – I need a foundation to build off of for determining realistic probabilities for good, better, and the best choices to the decisions that need to be made.

Back in March of 2007 I ran across a set of rules called Mythic Role Playing. Their claim to fame is that it allowed a player (or group of players) to run any role playing game (RPG) without a Game Master (GM). This had me intrigued because RPGs are notorious for requiring a lot of interaction between players, much more so than miniatures games, so if it could do what it advertised I might be able to use it for solo miniatures gaming. By April 2007 I wrote up two posts on the Solo War Gaming forum detailing how I had used Mythic for gaming solo with another THW reaction-based gaming system.

I learned a lot from that experiment, but ultimately I had missed the point of the exercise. I had used Mythic more to develop the scenario and less to regulate the decisions of the non-player enemy characters.

So What is Mythic?

Mythic is "a universal improvisational role-playing game." The key here is "improvisational, which the author states is because "the action and details in a Mythic adventure are concocted as you go along." The GM would normally define an adventure, complete with detail. In Mythic "you can start an adventure with zero details." In short, Mythic provides a mechanism for defining the details of a story, which would include numerous decisions by a number of non-player characters. In essence, this is what the solo gamer is looking for too, a method of defining decisions that the non-player opponent makes.

Logic: Used to determine what happens, or in the case of solo gaming, what decisions the NPG will make. The rule is, whatever the most logical decision is, that is what is expected to happen.

Interpretation: The logic mechanism has the player create a series of questions that can be answered yes or no. Dice are used to determine the answer (yes or no). Interpretation is required to translate the answer into either an action (in our case, on the tabletop) or to ask another logical question.

When questions are asked, rather than having a GM answer Mythic uses a Fate Chart to determine the probability of a "yes" answer. Dice are then rolled to determine if the answer is "yes", "no", an "exceptional yes", or an "exceptional no". In Mythic all questions are treated this way, including questions about hitting the enemy and the success of performing a task. When using Mythic with an established miniatures rule set (or RPG or board game), there is no reason to replace those mechanisms for the one in Mythic. Simply play the game as normal. Where you have to make a decision for the NPG – such as "where will this unit move?", "which unit will this archer shoot at?", and so on – use the Mythic mechanics. 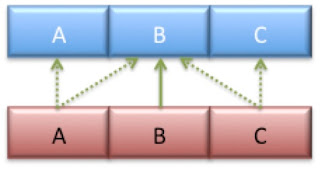 The key to Mythic is to not try and "trick it". If there are several choices select what you consider the most logical path first and ask the question so that answering "yes" would take that choice. For example, the rules you are using do not have targeting priority rules, so each eligible target is a choice. Consider the picture to the right. Assume we start by shooting with red B at blue B. When when we come to red A, our choices are to shoot at blue A or blue B. Assuming that our rules uses a method of accumulating casualties, rather than a straight die roll to determine if the enemy is eliminated out-right, it makes sense to concentrate fire on blue B and eliminate it, as it will (according to our fictional rules) reduce return fire to us more than if we spread the casualties out and will further garner us a victory point. So you might state that the odds are "Probable" for red A to concentrate fire, but if that succeeds the odds that red C will also concentrate fire on blue B becomes "Highly Probable". So, how would that all work? Once the fire from red B to blue B has been resolved, and casualties registered, the question posed might be: should red A concentrate its fire on the wounded blue B?" Not that this is a yes/no question; it is not posed as giving alternatives. If the answer is no, you will keeping posing alternatives as yes/no questions, in order of most probable to least probable until a "yes" answer is reached, or you are left with only one alternative remaining. Continuing on with our example, if the answer to the question above was "no", the only remaining alternative target is to fire on blue A, so no other question is asked; red A fires at blue A. However, if the rules give an advantage to withholding fire – because there is an ammunition limit or the fire can be used in the opponent's turn should he charge – there is a viable alternative, however improbable, so you must continue asking questions and rolling dice until you either get a "yes" or run out of alternatives.

Note that although you are asking questions from the most probable course of action to the least, as you get "no" answers and move to other alternatives, your odds may go up, not down. This is because if the dice have made you reject the most probable, it is more likely that you will select the second-most likely and so on. One way to understand this is to consider how you might reduce the choices down to a single die roll. Let's say that you have three possible courses of action: X, Y, and Z. If you were to determine the odds for each choice, reduced down to a single die roll you might assign X to occur 75% of the time (probable), Y at 20% (improbable), and highly improbable Z at 5%.


Normally you don't reduce all choices down to a probability chart because:

So, you ask the question "should it be X" and the dice say "no". Your two choices, Y and Z are rated 20 and 5, making Y four times more likely to be selected than Z. So the odds of choosing Y, now that X is not a choice, is 80%. If Y is not selected, the remaining choice Z, originally rated at 5% chance, is now at 100% because it is the only remaining choice.

All this may sound complex, but it is not. The idea is that you choose the most logical choice, assign a percentage of probability, roll dice to determine if it occurs and take the action if it does. If the choice is not taken, you determine the next most logical course of action, assign it a probability and roll. You will keep doing this until you have an action specified, either by probability or as a default.