Rally Round the King Redux

First, let me start by welcoming new readers Shelldrake, Los, Robert Saint James, and Spacejacker (like your blogs and the Gut Check rules look interesting). Hope you enjoy the blog. Also thanks to JF for plugging my blog on his blog, Solo Nexus.

So, as you may have guessed, I have decided to give Rally Round the King (RRtK) another try. I'll be using Comic Life 2 for the graphics and narrative, only breaking out to text for discussion about mechanics. I've modified the blog to be about 900 pixels wide, so those with 1024 by 768 resolution should have no problems reading it without having to scroll back and forth. The comic panels should by 800 by 600 pixels, so it should display in reasonable chunks and again not requiring scrolling to see it full size.

Rather than going through the same exercise as last time for terrain and deployment, I will use the same rolls, events, and results. So the troops will still be set up using the same parameters as last game, but I can alter deployment as long as I stay within those parameters.

Assume that the unit in the rear is to close to the line in front of it. It can neither wheel left nor right, and a facing change of 90º is not allowed. So it appears that the unit is stuck, unless the line moves forward.

However, the expansion rule allows a unit from the rear ranks to move out to the flanks, so long as the distance does not exceed the unit's movement. So to solve the problem above, the unit first moves forward into contact with the body to its front.

The following turn, the body expands, allowing the unit to move out to the flank. Note that it can do this even if the body is in melee contact (and is the primary way to expand the battle line and attempt to overlap your opponent).

Another rule that will come into play is Facing the Enemy. This rule states that if a unit is facing an enemy unit and is within charge distance of that enemy unit, the unit's choices are to move forward or remain stationary. I asked on the Two Hour Wargames forum if "remaining stationary" meant that it could voluntarily halt (it is not one of the reasons that is listed on why a body halts) and the answer was yes. So that changes the possible responses in the movement decision tables that I was describing in a previous blog entry.

In gameplay I will play the missile rules as designed, no moving and firing. Also, like Drums and Shakos Large Battles (see my Dale's Wargames blog for the review and playtest of these excellent Napoleonic rules), I have to be meticulous about not being so generous with the movement. It irritates me that a 15º wheel penalizes a unit as much as a 45º wheel, but that is the way the rules are. Units basically move straight forward until they collide, unless they are skirmishers.

As I indicated in a previous blog entry you can use the same Reaction Test mechanism to make the tactical decisions that RRtK does not make, namely:
It occurred to me, however, as I was drawing the tables up that I was violating my most basic rule of solo gaming, which was not to alter the game rules substantially, especially where you are messing with the math. By determining whether a unit made an optimal move or a sub-optimal one based on passing its ability score on two, one, or no dice, I was in effect making a morale check to move!

It seemed novel at the time the idea sprang upon me, and to be honest I think it would make for a fun method for programming an opponent, but I think those sort of rules would also need to be applied to the player's force in some way also. Making movement morale-based is a big change and not something you would want to apply unequally. (Of course, it really depends upon what you are looking for in your games. In this case, it was not to deviate from the Rules As Written too much. I did that last time.)

For this game I decided to go back and use Mythic for the three decisions above, however I tended to state the questions much simple, like: "Do I activate A, B, and C" this turn?" If that failed then you can always assume it was just one of those three that made it a no (unless it was exceptional, then it would be two).

On with the Battle! 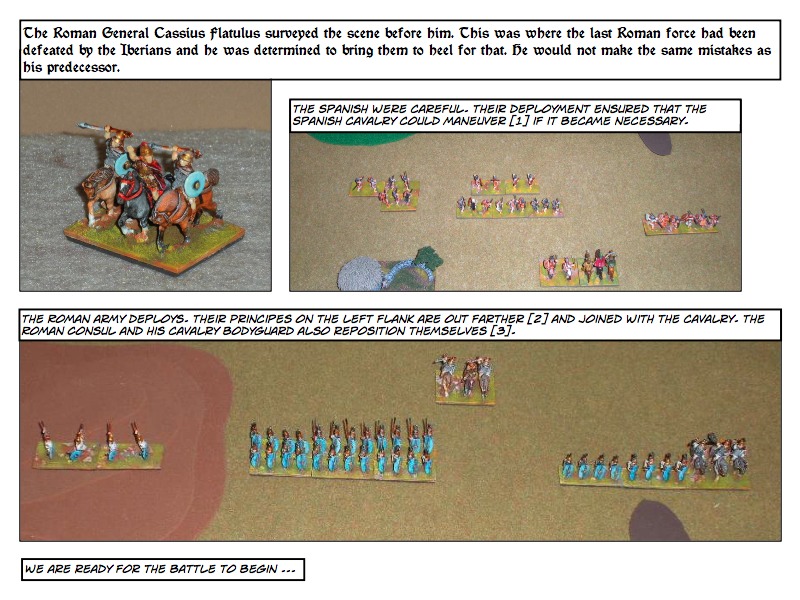 [1] Rather than rely on the trick to move up to a second rank and expand on the following turn (as indicated at the beginning of the blog), I decided that the General and Cavalry bodyguard would need to be on the flank of the battle line so that when it moved straight forward it would already be in position. The Light Horse on the left, being a skirmisher, could easily maneuver to wherever it needed to go.

[2] This was due to the deployment rules stating that the unit needed to be in the left section. In the initial game I had simply placed it to the left, but not in the correct 8" wide section. This creates a sizable gap ...

[3] As with the Spanish General, the Roman Consul with his bodyguard positions itself so that a simple move forward puts in on the flank of the heavy infantry, rather than requiring an expansion to come up from the rear rank. 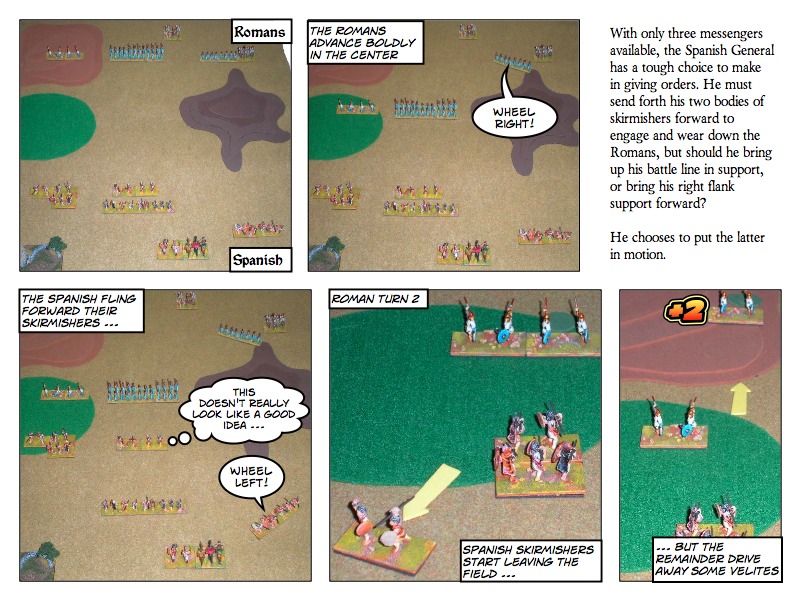 The exchange between the skirmishers in the woods show how important support can be. The Roman Velites both fired, but inflicted no hits on the Spanish. Nonetheless, the Spanish had to take a Received Fire test. I rolled double '6' for the check. Because the unit on the right had both rear and flank support it held (with two passes), however the unit on the left only had flank support so it had two failures and routed!

This makes me wonder about the definition of "support" and how I placed my troops. I assumed that because the scutari in the second rank was only in corner-to-corner contact that it would, at best, only provide flank support. However, you cannot support from the same flank twice. (Or am I thinking of DBA?) If I had placed my figures as shown to the right, the scutari should have been able to provide rear support for both, meaning neither would have routed in this instance.

Is RRtK more nuanced (or fiddly) than I thought or am I simply filling the holes in the rules with logical extensions? 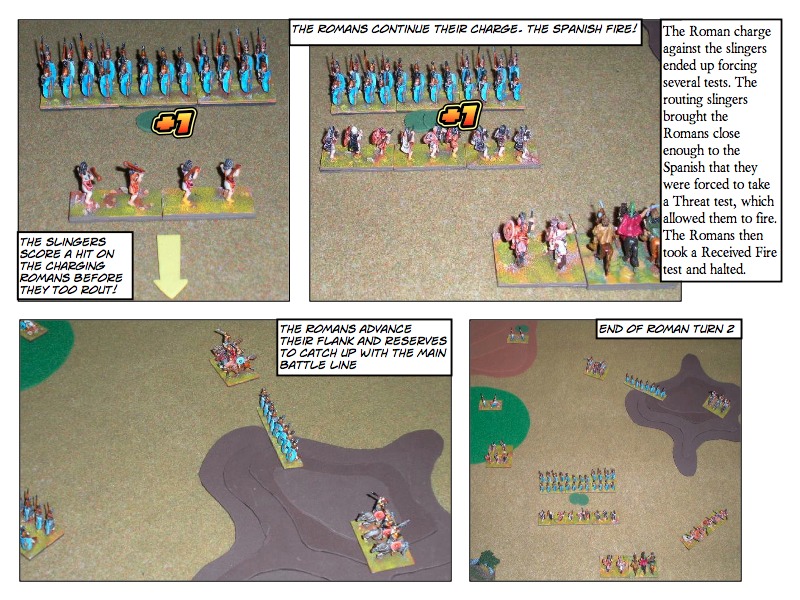 As you play with RRtK (or other THW games) more, you realize that you really need to be careful and make sure you take all the tests necessary. Charges, for example, can go very long distances as you charge, react to received fire (allowing you to advance again), which is turn can cause another test, and so on. Charges double the distance allowed are very possible.

It is also important that you get the unit activation sequence correct. If you don't, you can get some odd results, like this next turn ... 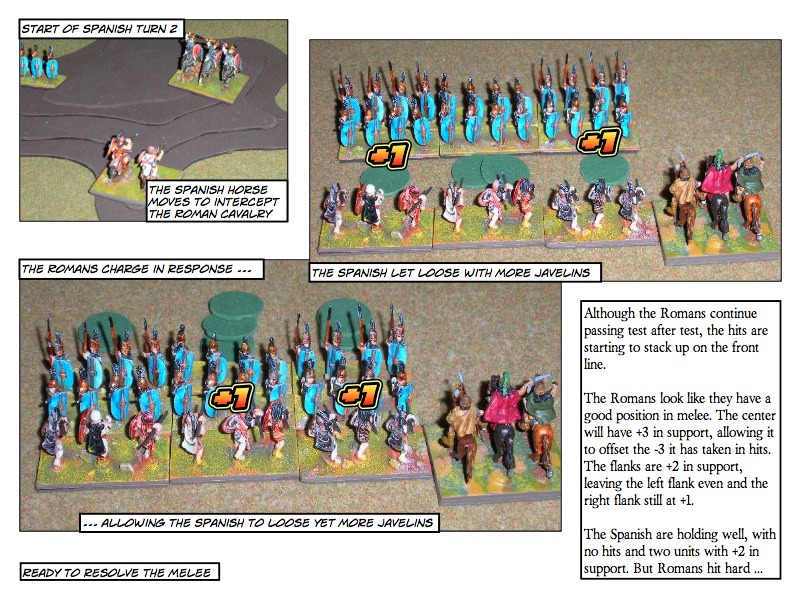 If you didn't catch what was wrong, then good! 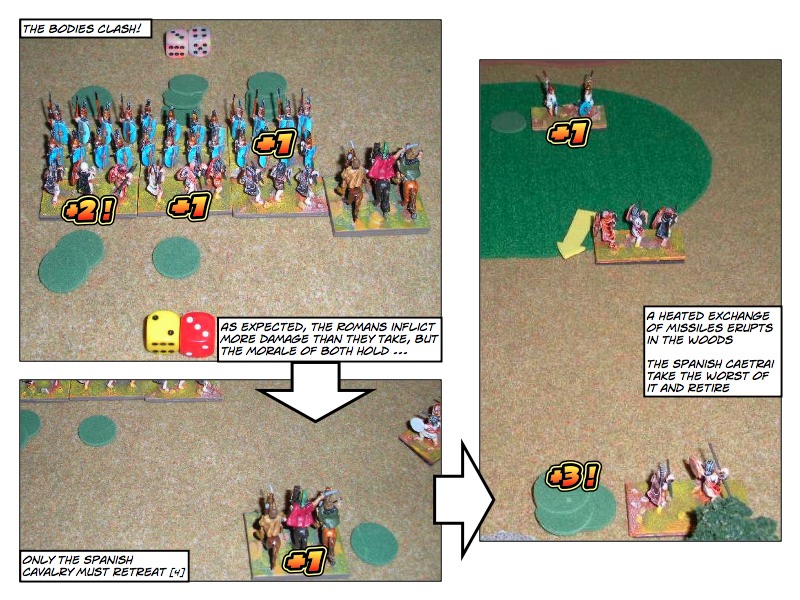 [4] Even though the Spanish General passed his reaction test, mounted that do not rout their infantry opponent must retire, taking one hit as they retreat.

The skirmish in the woods shows how successfully passing several Received Fire tests can result in units being mauled in missile exchanges. In this case the Spanish kept passing its tests despite getting hit each time. It finally had to retire. All of this is out of the hands of the gamer (solo or otherwise) of course as it is built into the reaction tables. 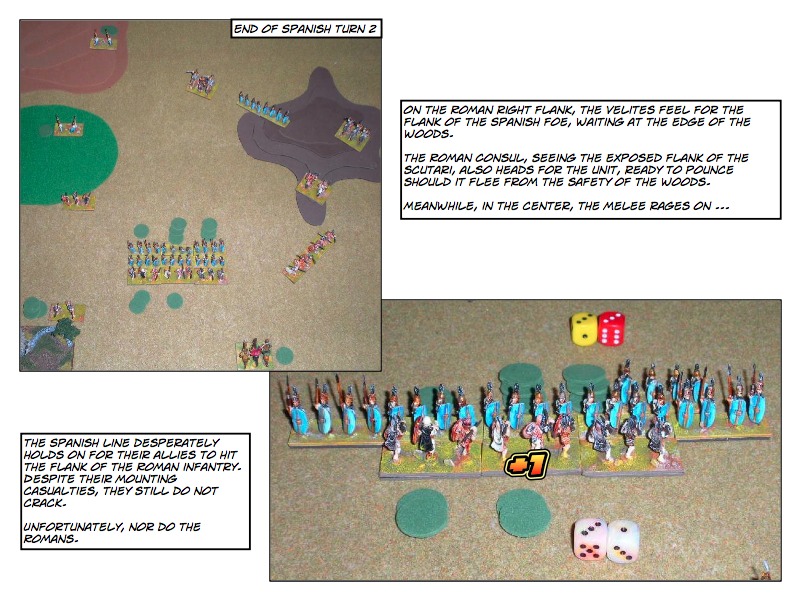 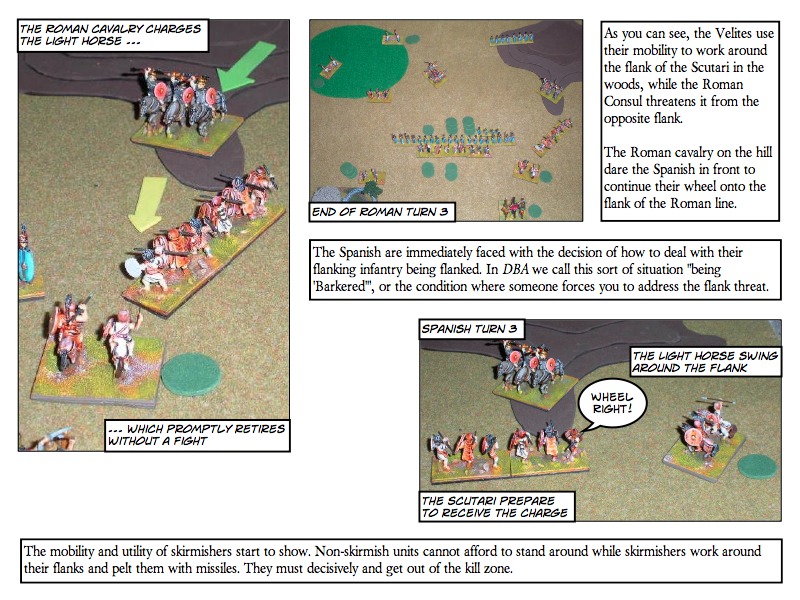 As you can see, a little more of my love for DBA slipped in. I cannot help but think of flanking an enemy and forcing him to react to you as 'Barkering'. 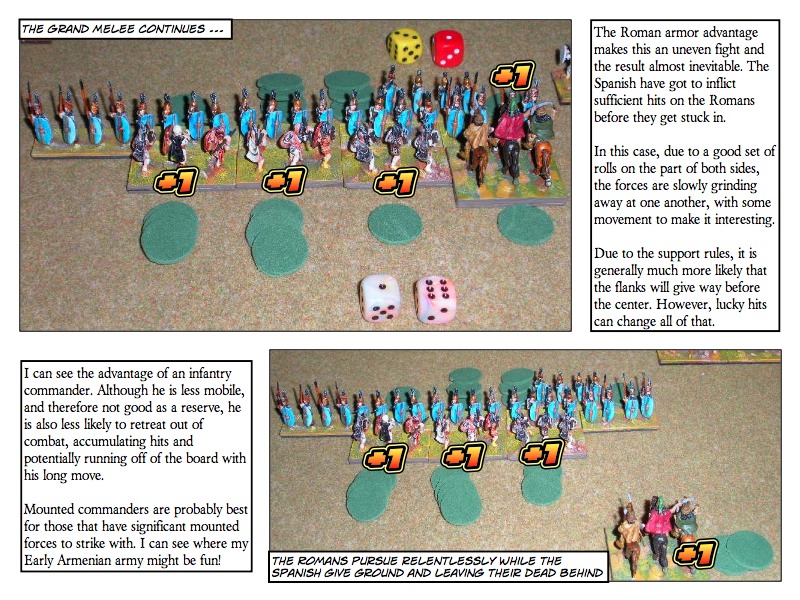 At this point I was starting to be amazed how the Spanish were standing up. Melee troops can stay in melee as long as they don't fail two dice, not one, so they have some real staying power. I was beginning to question the armor class (AC) rating I have given the Republican Romans, but as I was playing the 2nd Punic War, it is right. The reason for the pause, however is because the Spanish have to roll a '5'+ to get a single hit while the Romans get a hit on a '3' through '5' and two hits on a '6'! This makes it very hard for the Spanish to win in melee (as it should). 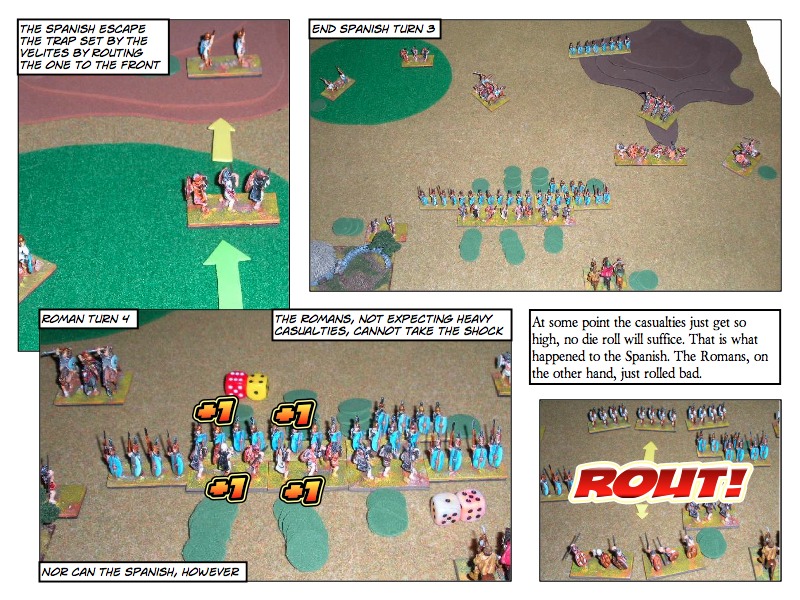 Now that the main battle line has routed, the end is probably near. However, as an equal number of Spanish scutari and Roman hastati have routed, it might be tough to call this one. 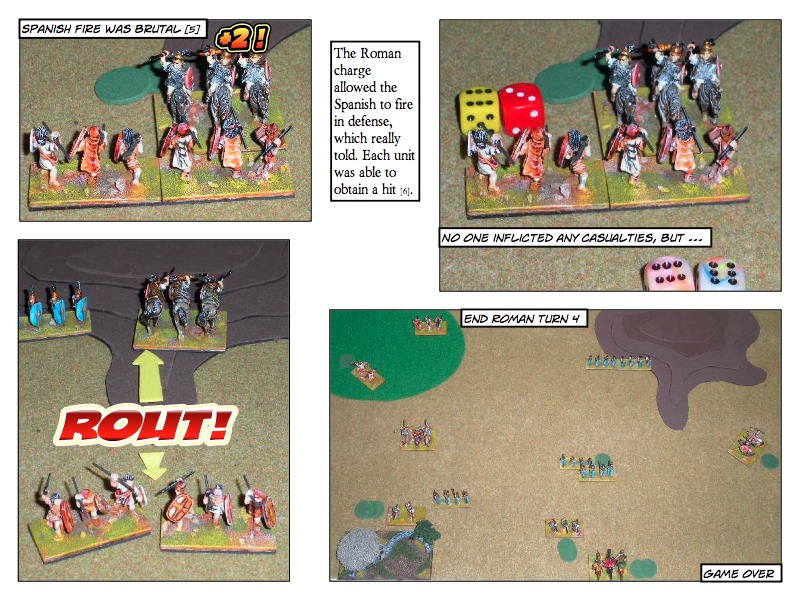 [5] Normally a unit firing missiles can only inflict one hit per unit firing. Further, because the 'arc' of fire is so limited (straight ahead) this picture would lead you to believe that only one unit could have fired and that the two hits are a mistake. However, I did not show each step of the process to charge, fire, and melee. When the cavalry unit charged the Spanish, it was overlapped by both units; thus both were eligible to fire. When melee came around, the cavalry unit is forced to line up on one or the other, which is what the picture shows.

[6] Yup! Both rolled a '6'. Apparently those dice needed to be switched out, however, and they kept rolling double sixes ...

I decided to call it quits at this point. The good thing about solo gaming is that it is not a competition (although it may be part of a campaign), so eking out every last victory point is not necessary. The Spanish had lost two slingers, one caetrati, and four scutari. The Romans had lost one velite, two hastati, and one equites (cavalry). The Spanish can certainly feel pretty good about how well they did in open battle. Nonetheless, I think the Romans can be declared the victors.

The best aspect of RRtK is the grinding, attritional feel of the game. (I just need to work on getting that feel without markers or rosters in my other games.) Sometimes I feel like the reaction results do not have enough granularity of result; it sometimes feel like all or nothing. Maybe I am talking heretically, but what is wrong with using three dice, or more?

Game play still feels stiff and rigid, however, because of the lack of maneuverability and fire arc. Given the small width of a base, I could see where people might argue whether a unit is within the arc or not for firing. One degree off and you get no fire.

Although I did enjoy this game, I would probably take elements from these rules and use them in another game rather than the other way around. There is some good stuff however.
Posted by Dale at 9:47 PM