So, we've looked at the basics of the reaction system, such as found in Two Hour Wargames' rules Rally Round the King (RRtK) and NUTS!, but also in Ambush Alley (apparently), and discussed using a Game Master emulator called Mythic to help us make decisions for the Non-Player General (NPG) using logic to set probabilities then dice to determine the actual course of action selected. Let's get a game on and work through some of the issues!

For this battle report I am going to use RRtK because it is a bit more manageable to start and I have a number of 15mm DBA armies that I can us to play out the game. However, the one problem to sort out is the scale. Like my internet buddy Shaun (who also has a blog about solo gaming and ancients), I prefer to play on a 2' by 2' table with 15mm armies, especially when they are DBA-sized (12 bases or so), but RRtK specifies a 4' by 3' table for the same figure scale and fewer units. This is largely because the movement scale is about triple that of DBA. (DBA's heavy infantry moves 200 paces or 2" per turn for a unit with 40mm frontage while RRtK moves about 6" per turn for a unit with the same 40mm frontage.) Shaun's solution was to reduce the movement in RRtK by about a third, which slows unit movement in relation to their width. I think I am simply going to play it straight.

This change can be offset partially by reducing the deployment area. In the standard rules, a player can deploy in a 24" wide by 9" deep box. By allowing no unit to deploy within 3" of either sideline (rather than within 12") and no farther than 6" from their baseline, the deployment area is reduced to 18" wide by 6" deep. However, the separation between forces remains at least 12".

Given a smaller deployment area, I should think about using fewer units, but as RRtK is a fantasy game, there are no historical army lists (only equivalents of a sort), so I really only have DBA and DBMM to go on. That said, I really want to get the game going, so straight DBA lists it is. I'll actually have a reserve to work with!

I decide to play the old stand-by: Republican (Polybian) Romans (DBA list II/33) versus Ancient Spanish (DBA list II/39(a)). The stats I will use for the troops are as follows:


I will be honest, a lot of the ratings above have to do with personal prejudices. I am listening to an audio book about Hannibal and the Second Punic War, so I cannot rate the Romans as REP 5 for the base troops and REP 6 for the Triarii; they just were not that good, in my mind. Of course, as the war wore on, they certainly got better.

I was also unsure of whether to rate the Spanish scutari as having a Combi-Weapon or Dual. The former simply gives a +1 to the first round of melee combat while the latter allows the unit to fire missiles. I believe it is the latter as it would allow them to rain down missiles on the Romans from difficult terrain whereas the former would not.

Following the instructions on page 27 of the rules, I follow the battle setup procedure.
Up through step 3 there are no real decisions to make. It is once we get to step 4, defender selects his baseline, that we have to start making some decisions for the NPG.

Using the rolls from above, we have a basic picture of the terrain. (Sections are numbered from top to bottom, left to right.) 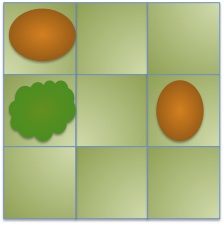 As this is a 2' by 2' board, each section is 8" by 8". Note that the rules state that each section is filled with the terrain indicated, either one large piece or several small pieces. "The important thing is to understand that the whole section is composed of that type of terrain."

So, now we arrive at where Mythic comes in. We have to decide which baseline the defender (the Spanish) will choose. Let's review the factors.
When using Mythic, I have found that you have two basic choices for using their system:
The first method simply has the player state which choice is most logical to choose and asks "Is this what the NPG does?" Although you may quickly run through in your mind why a particular choice is the best, you don't establish the reason why you make the choice, only that the choice is made. Using the second method requires you 'vocalize' your decision making process and helps you establish a 'rules base' with which to build upon later. Using these facts you then make the most logical choice. This is best illustrated with an example decision and using the two methods to arrive at a choice.

The decision to be made is: "which baseline do I choose, the top or the bottom?"

The first method asks direct questions, but we cannot ask the one above as Mythic requires you pose questions such that it can be answered with "yes" or "no". So, we have to ask either "Do I choose the top baseline?" or "Do I choose the bottom baseline?". Mythic further requires that we ask the most logical question first. If either choice is equally logical, it does not really matter this question I pose first. Each will generally have a 50% chance of being answered "yes". But, is either choice equally to the defender's advantage?

Looking at the board we see that the center row has two terrain pieces. Viewing just those two sections from either the top or bottom baseline, there is no difference; both are equi-distant from either baseline. Where the difference comes in is section 1 versus the opposite, section 9. Section 1 contains a hill whereas section 9 does not. So, is it advantageous to have a hill in your right deployment area, as opposed to it being clear? All of these thoughts about why one or the other is advantageous will give you a 'gut feel' for why one baseline is better than the other. How strongly you feel about one side over another will help you determine a ranking, which will set your probability. Here are the common odds rankings used by Mythic: Impossible, No Way, Very Unlikely, Unlikely, 50/50, Somewhat Likely, Likely, Very Likely, Near Sure Thing, Sure Thing, and Has To Be. This value is cross-referenced against the chaos factor currently in use. (I'll get into the chaos factor later. Just know that it is at '5' for now and that it, cross-referenced with a 50/50 odds rank produces a 50% chance of the question being answered "yes".)

My basic rationale for which baseline is better is that my goal would be to anchor the flanks of the Spanish battle line between the woods and the hill at the center line. Given that the Spanish have faster troops (overall), they stand a better chance of reaching the terrain sooner, plus with troops that fight better in that terrain, have a better chance of dominating in them. (This means they could 'un-anchor' the enemy's main battle line by flanking from the woods and the hill.) That all said, they would want the hill in their deployment area as it does not slow them down (seemingly) and it gives them a fall-back defensive position. So, to the question "Should the Spanish choose the top baseline?" I would rate the odds as "Has To Be", giving a 95% chance of a "yes" answer. (Note that if the hill produced a movement penalty, then I would have to weigh the advantage of the defensive fall-back position against the delay in reaching the primary position (the woods) and adjust the odds accordingly.)

For the Spanish NPG I will use the second method for all decision making. Using that method I would attempt to establish a few facts first, then draw a conclusion once I have enough facts established. Questions I would ask would be:

The questions might continue on from there, depending upon the answers. Note that this is not only establishing the answer to which baseline to choose, but because it provides the basis for that decision it can be used for others, for example on how troops should be deployed.

Personally, I like using rule bases and layering decisions one on another. I think it produces a more cohesive opponent and less of an erratic one, which could happen with an unlucky roll for a particularly critical question. (Mind you, if ever I get a roll that would wreck a game, I discard it.) So, I take the second approach when it makes sense. The important thing is not to over-think it. If you are struggling to find more questions to ask, but the previous rolls don't provide an obvious path to take, just ask the question directly and move on.

So, which edge will the Spanish choose for their baseline?

At this point it is clear to me that the bottom (sections 7, 8, and 9) as their baseline.

The last pre-deployment decision to make is for the Roman to decide if this arrangement is so disadvantageous that they refuse the battle, which starts the process all over again. To highlight the differences between the two methods of Mythic decision making, I will use the first method for the Roman NPG.

Internally I would go through the same thought process, but I would have to internalize the probabilities as always take the most probable path. This reduces to a simple question which then determines whether I have found the correct path in the decision tree or have to select another.

As the two sides are nearly identical, save for the hill in the deployment area, you essentially have to weight the disadvantages of the current configuration with the odds that something worse will be rolled up the next time. Additionally, as you can refuse battle twice, how many refusals remain play a factor.

In the nine sections rolled, eight of them rolled a 3+, resulting in Hilly or Rough terrain; only one was Open. On average, three sections should have been Open. That said, of the eight Hilly or Rough sections, only three (less than 50%) were actually some form of terrain feature. Overall, I think the terrain is rather sparse; it is just unfortunate that the two flank sections on the centerline have terrain to anchor on. Normally that is good, except against a light force like the Spanish. If the Romans were to refuse the terrain, it would be for that reason. That just means that the Romans will probably have to refuse one flank to ensure they do not get  attacked from difficult terrain on both flanks.

So: Do the Romans refuse this battle? (Very Unlikely or 15%) No (you don't really think I rolled, do you?)
With the battlefield set and it determined that the Spanish baseline is the bottom and the Romans the top, we are ready to move on to troop deployment, next time ...
Posted by Dale at 10:45 AM