One of the games that I have had for a long time is CMON's Arcadia Quest (AQ). AQ is an adventure board game with cool, chibi-style miniatures (i.e. big heads, smaller body, little hands and feet) playable by 2-4 players. Although it has "monster" enemies that are not played by a specific player, it is only semi-cooperative. Players compete against one another to be the first one to complete quests. When all quests are complete, the scenario is over, players upgrade their characters, and you move on to another scenario (another night). There are six scenarios played total in every campaign. 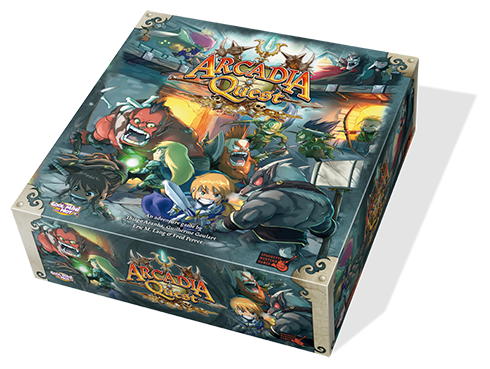 There are more than six scenarios defined, so each campaign can consist of a different mix of scenarios. Beyond that, each player uses three characters throughout that campaign and there are numerous characters to choose from, so there is quite a bit of replayability. All that said, despite the dungeon crawling, campaign aspect of the game, this is more of a player-versus-player (PvP) than player-versus-environment (PvE) game, although components of both exist.

Given that it is more PvP than PvE, how can you play this game solo? If you can convert this to a solo game, why can't you convert it to a fully co-operative game then? Let's start by looking at the regular game mechanics, how CMON changed it for solo play, then look at a game.

My goal here is not to review the entire rules, but to show how AQ works as a game, how the rules make decisions for the monsters, how combat works, and how a scenario is fought.

The basic combat mechanic in AQ is that every character (hero or monster) has an attack stat indicating the number of attack (black) dice they will roll, and whether that attack is ranged or melee. In addition, heroes have a defense stat indicating the number of defense (white) dice they will roll. Each successful defense roll (block) cancels a successful attack roll (hit). If there are more hits than blocks, the defender takes wounds equal to the difference. This leads to the third stat characters have, health, which is the number of hits they take before they are removed from play.

The primary difference in combat against heroes and combat against monsters is that the former have defense dice while the latter do not. This simplifies combat in that no one has to "play" the monster when a hero attacks one. There are no decisions to be made (at that time), it is simply does the hero inflict enough wounds to kill the monster or not?

The secondary difference between heroes and monsters in combat is that when the former's wounds equals or exceeds its health the combat is over. The hero's figure is removed from the board and placed on their stat card. (More on that later). Monsters, however, have a unique stat: the overkill stat. This stat represents the number of wounds that, if taken in a single hit, has killed the monster so quickly and decisively that it cannot strike back before it is removed. Anything less and the monster will get to make a "payback reaction".

Monster reactions are the "programs" for the monsters that dictate when a monster can act. Normally, monsters do not get a "turn". They stand in place in the designated location (according to the scenario) and do nothing until their program allows them to react to a player action. One of those reactions is when they are attacked and the hero does not manage to overkill them. At that point they can move (according to their movement stat) and attack the hero that attacked them. Some monsters have ranged attacks while others have melee attacks. It is possible, for example, for a hero to attack a monster and the reacting monster cannot move enough to attack the attacker back. 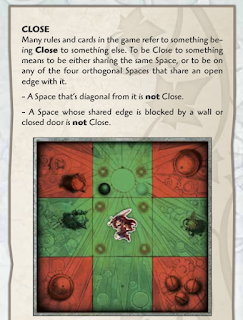 In both reaction cases, the player to the right of the player that owns the hero the monster is reacting to will act using the reacting monster and roll its dice. (Remember that AQ is primarily a PvP game, so there is plenty of incentive for the other player to act aggressively with the monster.)

Monsters are placed in squares initially as indicated by the scenario. The image below shows the configuration of the board, portals, tokens, player starting area, and locations of monsters and objectives. In addition, the marker indicated with the red rectangles are "spawn tokens". 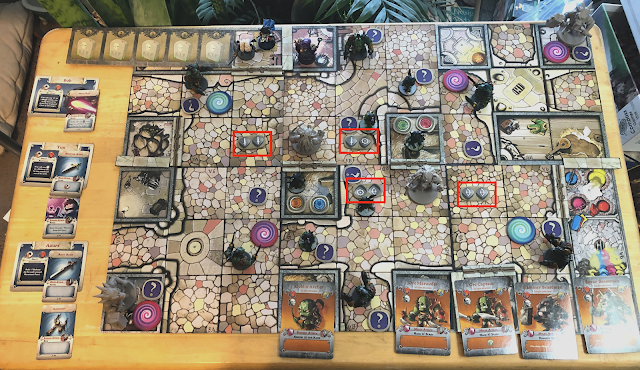 When a monster is killed it is moved off of the board onto the spawn track (the mini-board in the upper-left corner of the table with five slots). When all five slots are filled the monsters on that track will re-spawn into a random location on the board.

Each of the spawn tokens have two symbols printed on it. Two attack (black) dice are rolled for each figure on the spawn track, matching the symbols on the dice to the tokens. As there are three different symbols there are six unique combinations. As you can see in the image above, there are only four different combinations showing, so if a combination is rolled that is not on the board, that monster is permanently removed from the scenario, otherwise it is placed in the square with the corresponding token combination. (As there is a stacking limit to a square, if a combination is rolled and that square is already full, that monster is also permanently removed.)

As indicated above the basic turn sequence is as follows.

Note that the Monsters do not get a "turn", thus this is not a traditional IGO-UGO game. This will become significant when we look at the solo rules.

Again, the idea is not to fully review the solo rules, but to highlight how the core mechanics change when playing solo.

Combat mechanics do not change materially save for the Monster's movement stat. The stat remains the same – typically one square – but it is only used for payback reactions (reacting to being attacked by a Hero). As will be discussed in the Turn Sequence section, Monsters can move in their own separate turn and when they do, they will get to move three squares.

Because the intent is to use these rules by a single player, the mechanic of having the player to the right play the monsters when reacting will not work. The solo rules needed to tighten up their program on running the monsters. Because a reaction is always to a Hero and not to a player, nothing really needs to change. Either the monster can react to the moving/attacking player or it cannot. There are no real decisions to be made.

The mechanics do not materially change for solo play. The spawn tokens and spawn track still exist and are used the same way.

This is where the changes occur. The solo rules essentially have to change a PvP game to a PvE game. As before, no one "plays" the monster side, so the monsters need to be fully programmed.

The modified turn sequence is as follows.

With the Monsters taking an active role, and there being only one Guild (team) to counter them with, the scenarios are much harder than when playing normally.

The goal of any A.I. or programmed opponent is to take the following four decisions away from the player and for the program to make them:

Given that this follows a traditional IGO-UGO turn sequence, this question is easily answered: the side that is current active will act next.

The spawn mechanics partially answer the second question: two dice are rolled to determine which spawn point to reference. Draw a Monster card. The closest Monster of the type indicated on the card to that spawn point will act next. If more than one meets that criteria, then it goes to the player choice. The player can use a number of rules to break the tie, which is recommended.

The third question is partially answered with rules: the Monster will move towards the closest Hero and then attack them if possible. Essentially the Monster takes an Attack action with an optional Move action if needed to get them to where they can attack.

The fourth question is largely unanswered. Although there are rules governing how a Monster should choose a target Hero, in the case of ties it is silent on how to break the tie. Where most of the ambiguity comes in are in the execution details. For example, if a Monster can attack from more than one direction there are no rules governing deciding which path. Also, if a Monster has a ranged weapon, can it (or should it) advance to the closest point at which it can fire, or should it move its full move?

In short, the solo rules are something to build upon, rather than relying upon it to cover all bases. (It does not even have the generic rule to "roll a die to choose", relying upon the player to choose.)

The more this lockdown continues, the more opportunity we all have to try more solo gaming and their mechanics. Although you can always fall back on the old "play both sides to the best of your ability" method, this leaves many games feeling like a test of the game mechanics, rather than an exciting narrative playing out. In fact, if you get too invested in one side, the odds are your bias with come out in lackluster or even bad plays on the opposing side. That is why having a solid program really helps solo gameplay.

These rules are "challenging". There is no adjustment to the enemy roster and you are expected to not only defeat the same number of enemy that would face two to four times the number of player Heroes, but these enemy can move towards you at great speed. In the two test games I played, the player's party never got more than one square beyond the starting area!

Overall, however, I enjoyed them and would play them again, with a few tweaks.